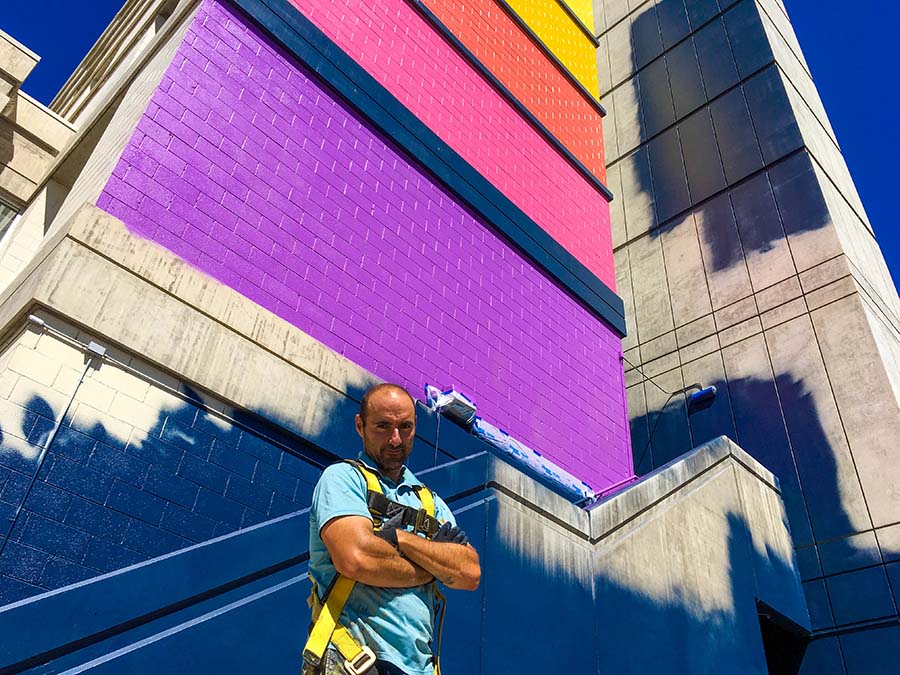 The University of Nevada, Reno campus is currently moving forward on the creation of a large-scale art mural project. The project consists of two thematically related murals, one located on the east-facing façade of Sierra Hall on Virginia Street at 10th Street, and one interior to campus located on the west-facing wall of the Ansari Business Building auditorium, between Ansari and the Pennington Student Achievement Center. Both murals are expected to be completed in July.

The mural at Sierra Hall is the first mural to be painted. It will include a multiplicity of people representing diverse races, ethnicities, religions and genders, their faces washed in bright swaths of color, their eyes engaging passers-by. These compelling expressions will be accompanied by a related quote that has not yet been finalized. The artist is considering potential passages by Martin Luther King, Jr., Audre Lorde and others.

The mural on the Ansari Business Building auditorium wall will include six full portraits of University students. As with the first mural, each person will appear with bright colors in the background to portray a powerful message of diversity. However, this time the poetic words will be penned by SaMoura Horsley, a University student who identifies as a Black woman and uses her poetry as a tool of advocacy and to spread awareness.

The selected artist, Rafael Blanco, came to the United States from Spain. He completed his Master of Fine Arts degree in the College of Liberal Arts at the University in 2013 and is currently living outside of Chicago working as an art professor, exhibiting his artwork in galleries and museums, as well as being commissioned to paint a growing number of public art murals.

“It is truly an honor to be back at the University in this capacity,” Blanco said. “I really appreciate the opportunity to be at the forefront of this important visual statement as a result of student initiatives.”

The mural project has been in the making nearly two years now originating as two separate mural proposals submitted by students. Two groups of students were simultaneously but independently vocalizing their desire to have an art mural on campus that would be designed and created around the themes of diversity, equity and inclusion. The students expressed ongoing concern about a lack of representation of diversity and people of color on campus and were seeking a proactive and positive solution.

Assistant Director for Residential Life Toby Toland was working with one group of students, and Vice President of Student Services Shannon Ellis was working with another group. These proposals eventually came forward to Vivian Zavataro, director of The Lilley Museum of Art, and Tamara Scronce, director of the School of the Arts. Zavataro and Scronce recognized an exceptional opportunity for these proposals to join forces and bring an accomplished visual artist to campus to create two unique but related murals.

“We are grateful for the students who stepped up and lobbied for this message; they are the reason these murals are happening,” Scronce said. “We are genuinely excited this project came about through student initiatives and is fully funded by student programming funds and School of the Arts student art fees.”

Although these murals have been in the works for nearly two years and funding was designated in early 2019, Scronce said the artist and students behind the project are proceeding with great awareness of the current political situation on campus, in our local community and in our nation. The students view the murals as being connected to the causes of the Black Lives Matter movement and they hope the murals are understood as expressing support for that movement. The murals do not represent an easy answer to long-standing issues that the campus has faced regarding diversity, equity and inclusion but rather a call to the University community and administration to stand with those who seek to advance anti-racist change and social justice.

Kiara Steinhorst, a student staff member for Residential Life, said, “I personally am very excited to see [the murals] and know they will affect change on campus.” However, she also cautioned it is important that these murals cannot be expected to be a Band-Aid for issues on campus regarding diversity. She believes ongoing action is necessary and fundamental.

Scronce indicated that the University is supportive of this project being directed by the School of the Arts on behalf of the students. The artist will aim to communicate with authenticity the commitment to and support for meaningful action that leads to transformative change on our campus and in our world.

“We want to be clear to the campus community and our community at large that we are using artistic expression and our platform for speaking out and to elevate voices that need to be heard,” Scronce said.