“My first memories are of wanting to help vulnerable populations fight for justice,” Maritza Perez said. “I was empathetic with underserved and underrepresented populations from a very young age because those are the people I identify with.”

An Elko, Nevada, native, Perez grew up one of seven siblings to Mexican immigrant parents who were unable to finish grade school. She said she understood from a young age the privilege of education and garnered high grades in school. While a still senior in high school, she applied for more than ten scholarships planning to go to a local community college because she knew of no other colleges. Perez hadn’t even considered the idea of university until her high school’s secretary handed her an application to the University of Nevada, Reno. 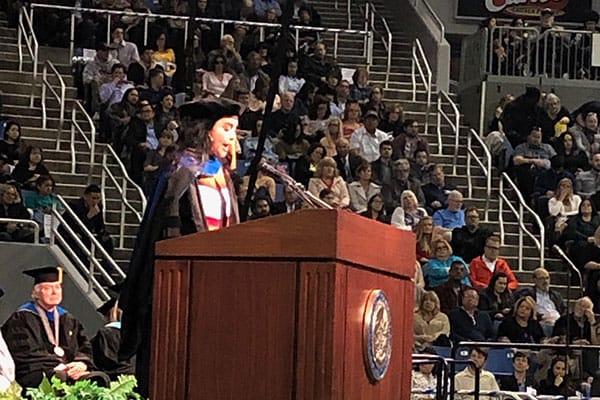 Perez was one of the spring 2019 commencement speakers, during the Reynolds School of Journalism commencement.

“All of these experiences and more allowed me to engage in community service and find my voice as an advocate of underserved populations,” she told graduates. “This growth would not have been possible had I not attended the University of Nevada – a place that taught me that when you go for it, the possibilities are endless.”

Perez went on to double major in journalism and Spanish and double minor in political science and economic policy. Once she graduated, she was accepted into the Teach for America program, where she taught fourth grade in New Orleans for two years. After teaching, Perez pursued a law degree from the University of California, Berkeley School of Law with the sole intent of becoming a civil rights attorney.

Upon receiving her law degree, she was awarded the Soros Justice Fellowship with the Mexican American Legal Defense and Educational Fund (MALDEF). At MALDEF, she worked with legislators and other civil rights groups to advocate on behalf of incarcerated people, immigrants and Latinos. In one story she shared in an email interview, Perez supported a legal team’s successful efforts to remove an individual from death row after showing evidence of racial bias in his trial.

Perez said her time as a Reynolds School student prepared her for her career by teaching her the importance of compelling writing. “This is a skill I need to use every day in my work, whether it be a letter to Congress asking them to revisit a legislative priority or in the reports I produce on distinct issues in the criminal justice system.”

Perez currently works at the Center for American Progress as a senior policy analyst for criminal justice reform. There, she continues her life goal of influencing policy decisions at the federal level to improve the lives of “some of the most marginalized people in our society: people who are incarcerated and formerly incarcerated.”

At the commencement ceremony, Perez shared that to her, higher education was more than just a way to earn a living. It was also a way to accomplish her childhood dream of serving her community and disenfranchised populations. She encouraged students to remember the power of community and to use their voices to lift up others alongside them.

“Recognize that community care and love is of the utmost importance and you are an integral and powerful member of our community…use the tools you have now [as graduates] to make our world better for future generations in whatever way that looks like for you.”