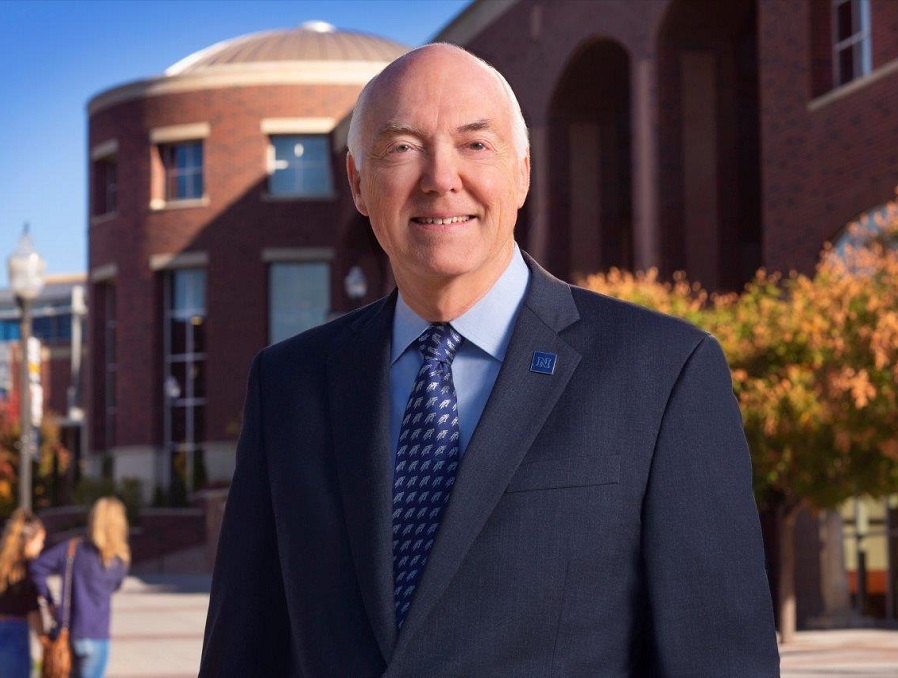 President Marc Johnson announced that he will transition to the faculty this summer following more than eight years as the institution’s 16th chief executive.

“From my first day on the job, I’ve always felt that the president of the University of Nevada, Reno has special responsibilities, not the least of which is to serve as a steward for this incredible institution,” Johnson said. “There comes a time for all who serve in this role to decide when is the most appropriate time for the University to find a new steward. Now is that time. The people of our University have achieved at historic and record-setting levels in practically every area of the life of our institution. It is with profound and everlasting gratitude to our people that I make this decision.

“Serving as the president of the University of Nevada, Reno has been the responsibility of a lifetime for me. I am extremely proud of where our University is today. Equally as important, I am excited about what the future holds for the next steward of this uncommonly vital, historically vibrant asset we hold in trust for the people of Nevada.”

Johnson said that his final day as president will be June 30, 2020. He will then transition to the Department of Economics in the College of Business as a professor. His announcement now gives the Nevada System of Higher Education Board of Regents time over the coming months to engage in dialogue with the campus about the qualifications needed for the University’s next president.

“Until June 30, 2020, however, the daily intention will be to continue the journey we have been on since I became president – to better the University in all three aspects of our mission – teaching, discovery and engagement,” Johnson said. “We set some really big goals in 2012-2013. The entire campus has come together to achieve many of them.

“But there is still important work to do.”

Johnson was appointed the University’s 16th president on April 20, 2012, by the Board of Regents. He served the year previous as interim president following the death of President Milt Glick.

During his time as president, Johnson led the University from the depths of an historic statewide economic recession that had seen the University’s budgets slashed to the highs of record achievement in practically every major University metric – all-time high figures in enrollment and graduation, student diversity and accomplishments, faculty productivity, research expenditures and investment by donors.

In December 2018, culminating a five-year effort that Johnson first mentioned during a “State of the University” address in 2013, the University was elevated to a prestigious “R1” classification by the Carnegie Classification of Institutions of Higher Education.

Working in the wake of the recessionary period in the early years of his presidency, Johnson guided the University through one of the institution’s greatest periods of faculty growth, with more tenure-track positions created, and student enrollment topping 21,000 for the first time. As state support has dwindled, the University’s infrastructure has continued to grow. New buildings that were constructed under Johnson’s watch include student-based facilities such as Great Basin and Peavine Halls, the E.L. Wiegand Fitness Center and the William N. Pennington Student Achievement Center as well as the University Arts Building and the soon-to-be completed William N. Pennington Engineering Building. In addition, historic campus buildings such as Lincoln Hall were retrofitted and repurposed, or in the case of Palmer Engineering, were modernized. Of the close to $500 million in capital improvements that have occurred during the Johnson presidency, only $71 million have come from state dollars.

During Johnson’s tenure, the diversity of the student body has transformed to better reflect the state of Nevada’s growing population – 40 percent of the student body today identify as students of color. The University reached a record of more than 5,000 graduates during the past academic year. Classroom student to teacher ratios are down to 18 to 1, with 235 faculty positions, 80 percent of which are tenure-track, added since 2014. In the last six years, annual research expenditures have climbed by 73 percent to $150 million.

With the implementation of the University’s Master and Strategic Plans in 2015, the University has gone to greater lengths to emphasize connection to the community through academic programs with benefit for the knowledge-based industries of Nevada, greater integration between the campus and downtown Reno as well as exchange of knowledge through innovative research. Just one example occurred with the opening of the InNEVation Center, Powered by Switch, near downtown Reno in 2015. Several high-tech oriented companies have been “spun out” of the facility as well as other University innovation-based facilities on campus, creating 195 jobs and raising $55 million in capital, helping to fuel northern Nevada’s economic resurgence. Johnson has also stressed curricular alignment with the economic diversification of Nevada, including new majors and minors in advanced manufacturing and high-tech areas.

Johnson began his career at the University as Provost and Executive Vice President for then-President Milt Glick in 2008, coming to Reno from Colorado State University, where he served as dean of the College of Agriculture. Glick’s death on April 16, 2011, shocked northern Nevada and saddened the campus. Johnson, as interim president, was able to bring a sense of stability while also acknowledging the important role Glick had played as the University’s 15th president.

“Milt once said that if he could, he would have bottled the students of our University up, put them on the shelves of every grocery store in Nevada and share them at every gathering in Nevada so that our state’s citizens could experience first-hand the beautiful treasure that is the potential of our young,” Johnson said during Glick’s campus memorial service at Lawlor Events Center on April 21, 2011.

Johnson’s leadership through a challenging time following Glick’s death was noted several times during the national search that was conducted for the University’s next president in spring 2012.

“Dr. Johnson is very honest and very straightforward,” said Erik Williams, speaking during the search in 2012 as chairman of the University’s Staff Employees Council. “He has really garnered our respect. He saw this University through changes and challenges, and did so with integrity.”

2016 Faculty Senate Chair Fred Harris said of Johnson, “In my dealings with President Johnson, I’ve always found him to be a thoughtful and engaged listener. He’s deliberative in his decision-making but also passionate about our mission. Like so many of us, he sees our University as the key to Nevada’s future. He values the work that is done, and wants to share our achievements with our community, our region, our state and the nation.”

Johnson said his goal, whether in times of challenge or in times of triumph, always remained the same: “In the next few years, our success isn’t going to come at a single point, or in a single moment. We’re on a sort of continuous timeline. Our ultimate success is going to be in how well our people connect the impact of their actual products they produce – students who graduate, new ideas that are found, new applications that will change how we do things – to the everyday lives of our citizens.”

Johnson’s stated “big goals” for the University, said one of the University’s top researchers, Sudeep Chandra, in a 2016 interview, were worthy and achievable: “The notion of the University becoming a high-impact research institution is exciting to me. It’s a lofty and profound vision. Most universities never strive for it. We’re pushing things right now as an institution, and I love it.”

Marc Johnson quotes throughout the years

On the University’s resiliency in the wake of the July 5 Argenta explosion: “The people of our campus have shown themselves to be brave and thoughtful, concerned and caring, laser-focused on all emergency tasks yet full of personal grace as the events of the past few days have unfolded. Thank you for showing why the University is a special place. Our University is located deep in all of our hearts. It is a place where we vindicate all of our best hopes, and our best actions. The past few days have shown why this is so.”

In support of DACA students: “For more than 140 years this public land grant university has welcomed students from all backgrounds with a desire to pursue a higher education regardless of immigration status or citizenship. We have absolutely no intention of changing that. In fact, recent events have leadership of this University recommitting to access, learning and success for our students. We further commit to creating a safe and supportive campus environment for our undocumented and DACA students. The University will continue to advocate for and stand with our DACA students. Our DACA students are important to our University, to the community, our state and our nation.”

On University graduate Colin Kaepernick’s decision to take a knee during the national anthem as a member of the San Francisco 49ers during the 2016 NFL season: “The University of Nevada, Reno will not abandon the many contributions that one of our graduates, Colin Kaepernick, made during his time at the University, based on his expression of the constitutional right afforded to citizens of the United States to express their views, whether in a controversial manner or not. The University is a place where we encourage open and meaningful dialogue, free speech and differences of opinion.”

On why he knew the quest for R1 would be successful: “I know for some the goal might have felt like a stretch goal. But I always felt as though faculty were buying in pretty quickly. One hundred percent of the credit for reaching this classification has to go to our people. That’s how we really got here. Our people bought in, and they worked extremely hard to make sure the institution made it.”