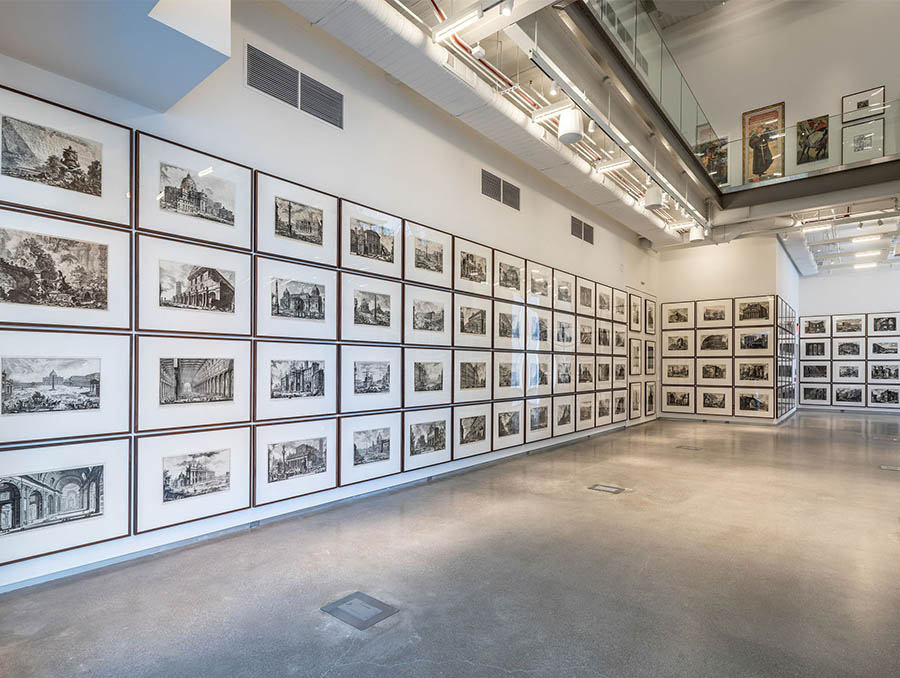 The travel postcard is perhaps the most basic of souvenirs. It’s cheap, it’s easy to find, and it captures a scene from the place visited. Although mail occupies an insignificant place in our daily lives compared to its role historically, the travel postcard remains. It is nearly impossible to enter a tourist shop without finding a spinning rack of these mementos.

The postcard itself came along in the 19th century, but before it existed, travelers had other means of converting a small slice of their vacation into paper: the print. In 18th-century Rome, artist Giovanni Battista Piranesi was known for his prints. Piranesi created dramatic and romanticized scenes of famous Roman buildings and ruins. Young, wealthy Europeans who traveled around Europe on the Grand Tour—a several-month-long vacation across Western Europe—purchased Piranesi prints to bring home to dazzle friends and family.

One-hundred thirty-five of these prints are on display in “Piranesi and the Eternal City” at the John and Geraldine Lilley Museum of Art at the University Arts Building. The exhibition features 133 prints from his Vedute di Roma, or “Views of Rome,” a rare nearly-complete set. The gallery entrance features 34 prints from his volume, “Le Magnificenze di Roma,” arranged in the order of their original publication.

To commemorate the end of the exhibition, The Lilley together with the voice area of the Department of Music will feature eight students singing famous Italian songs from Piranesi’s time at noon Sept. 26.

Piranesi himself was born in the Republic of Venice in 1720. He initially studied as an architect before moving to Rome, where he apprenticed under printmaker Giuseppe Vasi in 1740. Piranesi was fascinated by archaeology, though in his prints he did not always adhere to reality.

“Some of the buildings he put into his prints no longer exist, or he made them more lavish or put in more greenery that’s not there,” said The Lilley’s exhibition coordinator Kelly Keefe.

He also exaggerated certain parts of the architecture and altered perspective, which added to the majesty and drama of his prints. A prime example in the exhibition is his rendering of the Colosseum; in the image, the side of the building is extended beyond what a human eye would see, she said.

Piranesi’s portrayal of such architectural wonders greatly contributed to the conception of Rome’s history as one full of drama and romance, which in turn inspired many artists after Piranesi’s time. The prints exhibit a range of value that he created solely through the use of lines. Many 18th-century travelers visiting Rome after viewing Piranesi’s prints were often disappointed because his images portrayed the architecture with more grandeur than the buildings themselves actually possessed.

According to Keefe, “when [people] come in, they think that they are just ink drawings, and when you explain the detail and the processes to create these etchings, they become more interested.”

Etching is a printmaking process in which a copper plate, or flat piece of copper, is used to create imagery. To create an etching, the copper plate is first coated with an acid-resistant substance known as a ground. Piranesi would then use a needle to draw lines through the ground. The plate is then placed in an acid bath, where the acid would eat away at the copper in only the areas where it was exposed—where the lines had been drawn, as the rest of the copper would be protected by the ground. The plate would then be removed from the acid bath, and lines that the artist wanted to remain faint when printed would be covered, or stopped-out. Then the plate would be placed in the acid again and the lines left uncovered would etch more, creating deeper lines that would print darker. Piranesi’s plates were often placed in the acid bath 10 to 12 times to achieve his wide range of value. When the etching process was finished, ink would be rubbed into the lines and then the plate would be printed on a press that transferred the image onto paper through the use of pressure.

Though these art pieces were created in the 1700s, they remain captivating in current times as well. The prints straddle an interesting line between historical documentation and archaeology, and fantasy and the artist’s imagination. They transport the viewer back in time to the Rome of the 18th century, but also to Piranesi’s Rome.

Extending beyond the gallery, a student inspired by the prints or the process of etching could take “Introduction to Printmaking” in the University’s Department of Art, a course that includes etching done in much the same way as it was in Piranesi’s time. Non-University students could take a workshop in etching at Laika Press, a community printmaking press run by University art graduates. Additionally, the University’s Special Collections, from which the majority of the prints were sourced, has an array of prints and artists books and is open to the public. Special Collections has regular visiting hours and is located in the Mathewson-IGT Knowledge Center on campus.

The exhibition is a collaboration between the University of Nevada, Reno’s Special Collections and the Lilley Museum of Art.

According to Donnie Curtis, a librarian that works in Special Collections, the prints have been in the University’s collection since 1963 when they were donated by the family of an industrialist known as Edgar J. Marston.

The Lilley is located in the University Arts Building, and is open to the public Tuesday through Saturday from noon-4 p.m. General parking is available in the Brian Whalen Parking garage, located just northwest of University Arts. The main entrance to the Brian Whalen Parking garage is located on the east side of North Virginia Street, between 14th Street and 15th Street. Public metered parking is available at the lowest level of the Whalen parking complex, though parking on Saturdays is free.