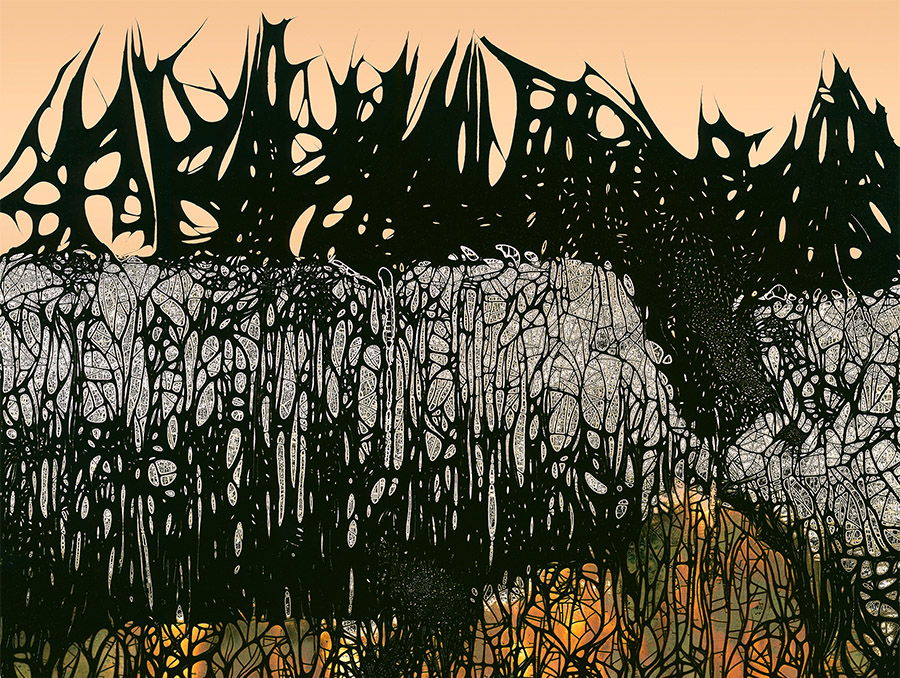 It seems that in art, restrictions can lead to the most interesting discoveries.

It was the heart of winter in Northern Utah, and Nolan Preece was in school at Utah State for his Master of Fine Arts degree. The weather was frequently in the negative 20s, and Preece, a photographer, could not get his equipment to function in the extreme temperatures. So, he temporarily gave up on photographing outside, and instead focused his time in the darkroom.

When he was younger, Preece mixed chemicals in his father’s home darkroom, and now, at Utah State, he began to experiment in ways he never had before. He was working in the realm of non-figurative photography; using various chemicals and materials on light-sensitive paper, Preece was creating unique abstract imagery.

Preece moved to Reno in 1992 and has continued his working in these experimental processes up to the present day. A retrospective of his work will be exhibited from Oct. 24 to Dec. 20 at The Lilley Museum of Art, where visitors will have a chance to experience how his technique has changed from the 1970s to today. The exhibition was curated by the former director of the University Galleries, Paul Baker Prindle.

“[Baker Prindle] chose a local artist to showcase the talent we have here in Reno,” said Vivian Zavataro, interim director of the John & Geraldine Lilley Museum of Art. “Preece is internationally known, he has an incredibly prolific career, which provided Baker Prindle with a large body of work to choose from. This exhibition is a great display of Nolan Preece’s extraordinary process and also of the amount of artwork he has created throughout the years."

He has exhibited at and has work in the collections of museums and institutions across the nation, from the Southeast Museum of Photography to the New York Hall of Science.

Preece works primarily in two processes, which he discovered through his experimentation and research (though over the years he has met other artists working in these or similar processes). Neither method involves working with a camera or lens like traditional photography, but rather in the darkroom with light-sensitive paper used in analog photography.

The first process is known as a chemigram, which is in Preece’s words, is “an equal mix of photography, painting, and printmaking.” The photography portion comes from the old silver-based photo papers Preece uses as well as the darkroom chemicals, namely developer and fixer. He uses different materials on the photo paper to create resists which the chemicals react to in various ways. The painting portion comes from Preece scanning the photo and then altering it digitally in Photoshop—he subtly changes some elements and enhances specific colors.

The other photo process he regularly works in is called cliché verre, in which mineral spirits are dripped on a soot-coated piece of glass creating atmospheric patterns. Today, both methods still involve a lot of experimentation for Preece.

“It’s fun to play with — you just hope for something interesting every time,” he said. “Sometimes, you have about 50 percent control and then serendipity is the rest of it. But it’s like firing a pot in the kiln or whatever, you stick it in there, and you don’t know what it’s going to look like when it comes out.”

Preece has lived on both sides of the Great Basin—Utah, then Nevada—for about 20 years each, and the desert landscape has figured prominently in his work throughout his life. He has worked as a river guide in the Grand Canyon and freelanced as an environmental consultant. Much of the subject matter of his figurative photo work consists of environmental issues. Yet, it took time before he combined his love of landscapes with his passion for experimental photo processes.

“I figured that since I was working with fossil fuels with the chemigram … when I finally took that leap back to [working with] the landscape and [the resulting images] looked so strange—no people in them, no plants—and I thought, ‘Wow these are like post-apocalyptic things,’” he said.

Most of his current chemigram and cliché verre work depicts the land while subtly addressing environmental issues.

“The fascinating aspect of his work is his ability to create a new medium in itself,” Zavataro said. “He uses photographic processes to produce these pieces that look like abstract paintings. That bridge across photography and painting is a unique characteristic of his work. We are excited to have his oeuvre here at The Lilley and to give an example of how talented the artists in our community are.”

Preece will give a gallery talk on Thursday, Oct. 24 at 5 p.m. in The Lilley Museum of Art, with a reception to follow from 6 to 8 p.m.

The Lilley is located in the University Arts Building and is open to the public on Tuesday noon-4 p.m., Wednesday noon-4 p.m., Thursday noon-8 p.m., Friday noon-4 p.m., and Saturday 10 a.m.-6 p.m. General parking is available in the Brian Whalen Parking garage, located just northwest of University Arts. The main entrance to the Brian Whalen Parking garage is located on the east side of North Virginia Street, between 14th Street and 15th Street. Public metered parking is available at the lowest level of the Whalen parking complex, though parking on Saturdays is free.