Brings goals of partnerships, fundraising, innovative research to the College 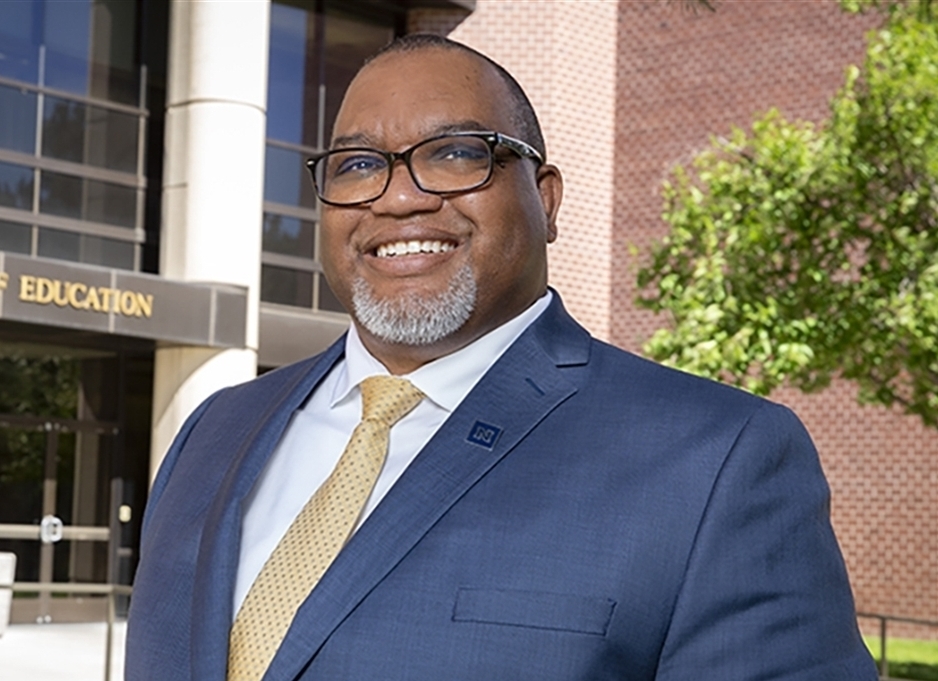 Brings goals of partnerships, fundraising, innovative research to the College

Donald Easton-Brooks is the new dean of the College of Education. He arrived on campus July 1.

"I'm very pleased that Dr. Easton-Brooks has joined our leadership team," Kevin Carman, executive vice-president and provost, said. "He brings extensive experience as dean and associate dean and has a strong record of promoting collaboration across the disciplines. Donald has served in numerous leadership roles in national and international education organizations and is highly regarded by his colleagues across the country.

"He has a strong record of promoting research productivity, both in terms extramural funding and scholarly publications. He leads by example through his excellent record of scholarly productivity and is an internationally recognized authority in equity and inclusion within the discipline of education. I'm confident that Dean Easton-Brooks will build upon the outstanding progress that the College of Education has enjoyed under Dean Ken Coll's leadership."

"I am thrilled to be a part of the University of Nevada, Reno at this time in its history," Easton-Brooks said. "Reaching (Carnegie Classification) Research 1 (R-1) status speaks first to the great effort and work of the faculty and staff at the University. This status also announces a new and exciting time for the University.

"As dean of the College of Education, I believe that it is now our opportunity to build on the incredible status by showcasing to our state, the nation and the world the relative and impactful work we are doing within our local communities and region. I look forward to assisting the college as we build stronger relationships with our partners, become a support to our state, and become a college with innovative and engaging research and practices that are accessible globally."

Under Easton-Brooks' direction, South Dakota's School of Education has seen implementation of a strategic plan and innovation efforts that have led to national recognition of the school's teacher residency program. This has in turn led to an increase in enrollment of 31 percent at the undergraduate level and 11 percent at the graduate level. After having never been previously ranked in U.S. News & World Report's annual rankings, the school is now ranked 43rd in Online Education Programs and in the top third in Graduate Education.

He has also excelled as a nationally and internationally recognized leader in the areas of diversity and equity. Viewing himself as "a critical quantitative culturally responsive researcher," Easton-Brooks' research agenda has helped shape policies both in the United States and in countries such as Africa, New Zealand, Germany and Australia. He is a section editor on "The Handbook of Teachers of Color" through the American Educational Research Association (AERA), and through his help in the introduction of the concept of "ethnic matching" to the field of education, has promoted the creation of a more diverse workforce in education. He is author of the just released book, "Ethnic Matching: Academic Success of Students of Color," (Rowman & Littlefield, https://rowman.com/ISBN/9781475839678/Ethnic-Matching-Academic-Success-of-Students-of-Color).

While at South Dakota, Easton-Brooks helped create campuswide collaborations and partnerships that have furthered School of Education's reach. He has established new opportunities with the institution's School of Medicine and School of Health in developing a Health Education and Medical Education doctoral degree. Fourteen of his school's faculty members applied for national grants with schools and colleges across campus on topics such as biomechanics, neuroscience, STEM, learning science and mental health. A Center for Research was created to assist faculty with research and grants. This initiative has helped lead to a 70 percent increase in the school's research portfolio since 2015-2016.
Easton-Brooks received bachelors degrees in Sociology from Greenville University, his master's degree in Early Childhood Special Education from the University of Colorado at Denver, and his doctorate in Educational Leadership from the University of Colorado at Denver.