For the series, KUNR reporters produced more than 30 in-depth stories, including sound-rich features and detailed interviews with local stakeholders. The station also produced videos and audiograms for social media, as well as a 10-episode podcast with extended interviews with its reporters about what they learned during the reporting process. The series ended with a live community event to provide residents with access to local experts.

"We examined the crisis from several lenses, including economic, public health and political angles," Michelle Billman, KUNR news director, said. "We also made sure to talk to real, everyday Nevadans who are struggling." 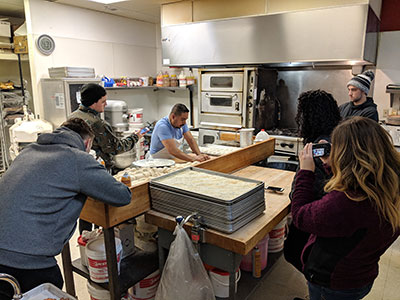 Students in Noticiero Móvil cover stories about the local community in English and Spanish.

In addition, KUNR won regional Murrow Awards for excellence in innovation for its bilingual partnership with Noticiero Móvil, a bilingual news outlet at the Reynolds School, and best feature for Reynolds School alumna Holly Hutchings' story covering an artists' haven in an industrial area of Reno.