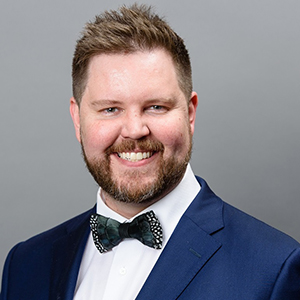 Jimmie Manning seems to be somewhat the man of the hour in the College of Liberal Arts. Recently hired as professor and chair of communication studies, Manning came from teaching at Northern Illinois University for the last six years and has now hit the ground running at the University of Nevada, Reno. He was excited to accept the job because of the opportunity to work with amazing faculty who do research that is engaging, help communities with their projects and deal with issues of social justice.

"That was my biggest attraction to the University," Manning said.

Although academia is important, Manning is most excited to be in Reno and lay down his roots. He is looking forward to starting a family soon and will be getting a new puppy this spring. Doting over his new Goldendoodle, dreaming about filling his house with children and talking about his hatred for black olives, Manning is personable, grounded and just might instantly become your new best friend. Usually spotted in a bowtie, he is also an academic leader with a mission.

Manning is filling his spring semester with new faculty trainings, meetings and travel to watch the debate team compete in Salt Lake City, Utah. He also is eagerly congratulating fellow faculty members as they accept top-paper and book awards at the next regional communications conference.

He also has plans to grow the communication studies major, as well as plan and implement a doctoral program. Manning said he is optimistic that a Ph.D. program can be successful because of the talented and engaged faculty the University currently has in the department, which puts the University of Nevada, Reno in a strong position for creating a Ph.D. in communication studies that graduate students will seek out.

Manning's research interests include studying relational and family communication as well as computer and media communication. He's currently working on a research project on "ghosting" - someone who disappears from a relationship after initial connections seemingly go well. An example of this is when two people meet, begin exchanging text messages and then suddenly one person in the relationship stops texting and doesn't return any of the messages.

"One of the assumptions of the people who do it [is that they] are cowardly or rude, but for women, it can be a way to protect them from a creepy, gross man who may have crossed a line," Manning said.

His research aims to explain the positives of ghosting as a means of protection from hostile interactions or unwanted sexual advances. He hopes to persuade people not to always view ghosting as negative.

Another one of his research projects looks at the benefits of a seemingly negative communication interaction - sexting. Manning's research with participants show how sexting can help sustain relationships for couples who may be involved in a long-distance relationship or for the couple experiencing the struggle of work-life balances.

Although he's eager to get back to his research and leading the communication studies department, Manning has one important accolade to accept first. He was recently given the honor of having an award named after him. In April, Manning will hand out the first "Jimmie Manning Award for Top Paper" submitted to the Sexual Orientation and Gender Identity Caucus of the Central States Communication Association.

It's clear with this accomplishment and his many others, Professor Manning has already made a name for himself in his profession as well as the department and joins the many other distinguished faculty of the College of Liberal Arts.