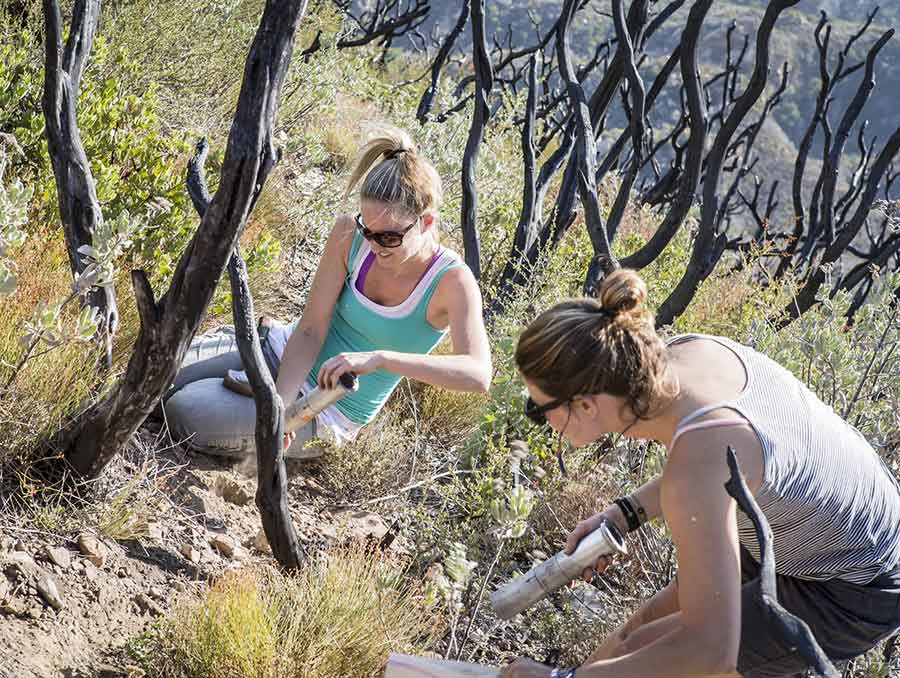 Thanks to a $1.1 million grant from the National Science Foundation, we will soon have a better understanding of how much nitrogen arid ecosystems can absorb before they produce negative effects. The study is being conducted by scientists at UC Riverside; University of Nevada, Reno; and UC Santa Barbara.

Scientists know nitrogen pollution can cause acid rain, damage waterways, and leach beneficial nutrients from soils. However, most previous research on the environmental effects of nitrogen has been conducted in temperate forests, such as those in northeastern U.S. In dryland ecosystems, such as those in many areas in California and Nevada, the threshold at which nitrogen becomes problematic is largely unknown.

“Whereas temperate forests are relatively moist all the time, here [in southern California], we can easily go six months without rain, which changes everything,” said UC Riverside soil scientist Peter Homyak, who is helping to lead the new study. “Nitrogen pollutants can move downwind from megacities like Los Angeles, adversely affecting our air, water and soils.”

Many shrublands in the western U.S. that were once was dominated by thirsty woodland or evergreen chaparral plants are now dominated by grasses that die in summer. This means that there is not vegetation to take up large amounts of nitrogen in the soil.

“While some amount of nitrogen in the soil helps plants to thrive, when you start to have too much, there are undesirable consequences to our water and air,” Homyak explained.

The three-year research project will allow Homyak; Erin Hanan, fire ecologist with the University of Nevada, Reno, who is leading the study with Homyak; and collaborators at UC Santa Barbara to monitor how three dryland ecosystems in southern and central California process nitrogen, and to gauge saturation levels. From this information, they can then build models to help predict what may happen in the future and what we might do to mitigate detrimental impacts to our water quality and air.

“If we can get a better understanding of how nitrogen cycles through these drier watersheds, we can build models to help us predict what will happen under increased nitrogen loads and in a warmer, drier future,” said Hanan, who is also an assistant professor in Nevada’s College of Agriculture, Biotechnology & Natural Resources, and a researcher with its Experiment Station. “Dry ecosystems represent a third of Earth’s total land surface, so understanding how they respond to pollutants is important.”

Hanan says that current models don’t do a very good job of predicting how excess nitrogen from human sources moves through landscapes. In addition, the current models have limited ability to predict how much of the reactive nitrogen will end up in streams, rivers and reservoirs.

To get a better, more accurate picture of how waterways are being affected by nitrogen pollution now, and how they may be affected in the future under various climate change scenarios, Hanan will use the data and build new models.

“This will improve the way we model nitrogen cycling and how it moves through watersheds,” she said.

To determine whether dryland ecosystems are getting too much nitrogen, the team will monitor for emissions of gases such as nitric oxide and nitrous oxide from soils. Nitric oxide is a precursor to ozone in the lowest layer of Earth’s atmosphere. It is an air pollutant and a greenhouse gas. Nitrous oxide is also a powerful greenhouse gas, responsible for the destruction of a higher, beneficial ozone layer.

An ecosystem’s response to nitrogen is strongly influenced by microbes, so the team is also examining microbial responses to the element. If microbes have too much nitrogen, they may stop producing certain enzymes that help cycle nutrients.

At the end of the project, the team will use both field data and models to help fine-tune “critical loads,” which define the amount of nitrogen that can be added to an ecosystem without causing negative effects. Lawmakers can then use this information to establish policies that would limit nitrogen pollution, such as reducing fertilizer use in agriculture or supporting cleaner transportation systems.

“Ultimately we want to produce numbers to inform measures that effectively protect our land, our air, our water supply and our ecosystem’s ability to support life,” Homyak said.