UNR Med Class of 2018 ready to make a positive impact

UNR Med Class of 2018 ready to make a positive impact

Fourth-year medical students at the University of Nevada, Reno School of Medicine (UNR Med), celebrated commencement, one of the most anticipated days of the year for these new physicians, this afternoon at the Pioneer Center for the Performing Arts in Reno. During the event, a Hooding Ceremony marked the completion of undergraduate medical education for the 39th class to receive the degree of Doctor of Medicine (M.D.) from UNR Med. The Hooding Ceremony, symbolic of passing the guard from one generation of doctors to the next, recognizes those graduating students with MD degrees. The class of 2018 received their academic hoods and recited the Physician’s Oath, reaffirming their commitment to the medical profession. With the oath, graduates affirmed the high standards of performance and ethical behavior to which each physician aspires at every stage of his or her professional career.

Returning to Reno and UNR Med, Eagle spoke of his journey through medical education, and building a successful career. He offered advice to the graduates, urging the graduates to try new things, follow their instincts and most importantly - to work hard – as each of the new doctors will play a crucial role in the future of each of the communities they’ll be training in and serving. “Your impact, wherever you go, amid a nationwide physician shortage, cannot be understated,” said Eagle.

According to the Association of American Medical Colleges, the United States may experience a shortfall of up to 49,300 primary care physicians by the year 2030.

Nevada ranks 48th in the U.S. in the number of physicians per capita, according to the 2017 UNR Med Health Policy Report. For primary care physicians, it ranks 50th. 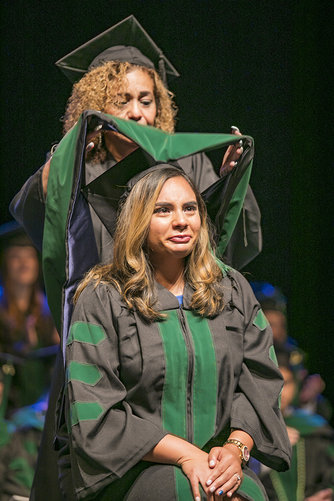 Access to graduate medical training programs for residencies and fellowships is a competitive process. This year’s graduating class continues UNR Med’s tradition of placing graduates in some of the nation’s most competitive residency programs, including in Reno and Las Vegas, with students entering a wide array of specialties. Approximately 34 percent of UNR Med students are staying in Nevada for some part of their residency training, and 49 percent matched in primary care, which includes family medicine, internal medicine, internal medicine/pediatrics, pediatrics and obstetrics/gynecology.

“UNR Med is committed to increasing the number of physicians in Nevada by educating more medical students, retaining them as residents and ultimately as practicing physicians,” said UNR Med Dean, Thomas L. Schwenk, M.D. “We’re thrilled that eight students will be staying in northern Nevada and 22 students have matched throughout the state. The fact that students want to train in Nevada supports our goal of training physicians who recognize the health care needs in our community and are committed to staying or coming back to Nevada. A major component of that is our community-based and community-engaged curriculum model.”

Residency training location is a strong indication of where physicians will likely set up their medical practices following completion of residency and has strong implications for the future availability of healthcare professionals in a given area.

Graduating medical student Emmanuelle Garcia said she couldn’t be more excited to begin her medical career in her hometown of Reno. “I am thrilled to be staying in my hometown to complete my residency training in psychiatry. We need providers who are passionate about improving the mental health landscape in Nevada. I hope to provide care not only in Reno but also to rural northern Nevada. This city and state has given me so much, and I am excited to give back to it,” said Garcia.

UNR Med’s graduates aren’t the only ones who are celebrating their past, present and future. In nearly 50 years, the state of Nevada’s first public medical school has undergone significant positive and transformative growth. 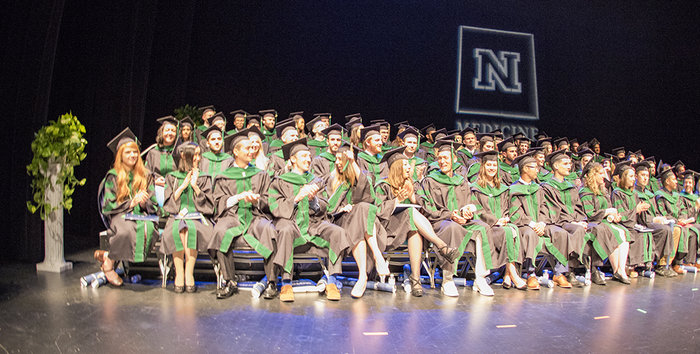 The UNR Med class of 2018 celebrated commencement at the Pioneer Center for the Performing Arts in Reno on Friday, May 18, 2018. UNR Med photo by Brin Reynolds.

UNR Med will celebrate 50 years as a community-based medical school in 2019.  Anniversary celebration observations will be marked throughout 2018-2019, including the launch of several new programs. UNR Med is launching a new department of surgery, a new Physician Assistant Studies Program and an OB-GYN program in order to increase the number of physicians in Nevada by educating more medical students, residents and fellows.

Earlier this year, UNR Med’s accreditation was renewed by the Liaison Committee on Medical Education (LCME) through 2026. This achievement confirms that UNR Med’s programs, faculty, resources and partnerships are meeting or exceeding national standards for medical education.

UNR Med has educated more than 2,000 students, residents and fellows since it was founded in 1969.