Undergraduate English literature major, Yadira Santana, is studying how students in the U.S. are affected by illegal immigration. Santana said she believes students who are undocumented or who have undocumented parents are negatively impacted both socially and academically because they live in a state of fear.

Santana is a senior at the University of Nevada, Reno and working on her senior research project under Professor Elizabeth Francis' mentorship. Her project blends immigration, family and international law which are areas of study Santana is interested in pursuing after graduation. Initially she was focusing on immigration theory, but through research she decided to focus more on illegal immigration. She quickly realized the topic meant much more to her as she has witnessed the effects of illegal immigration first hand in her community. 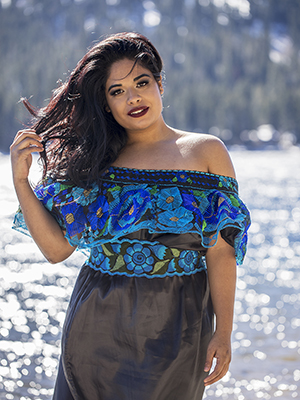 Initially, Santana began research by posting flyers asking to speak with students affected by DACA. With little response, she discovered that many college students are fearful of how deportation could affect their future. This fear, she says, is more complicated than she initially expected. Students in her study were concerned about what they would do without the support of their parents and how they would keep the rest of their family together if a parent was to be deported. This fear is an added stress that she believes affects students' grades and ability to focus. "[Students] are going to school to improve their lives," she said. "They don't need more to worry about."

One college student she spoke with was fearful her mother would be deported and what that would entail for her. If that were to happen the student felt she would have to take over the motherly role for her younger siblings. Because of this fear and inability to focus, the student almost failed a course.

Santana believes her testimonies reflect a greater issue that extends beyond academic struggle. She said children are not comfortable sharing their culture and their background. "[A student indicated he] would actually tell friends that he was born and raised in Nevada out of fear [of being deported]," Santana said. According to Santana, the majority of undocumented citizens come to the United States for a better life and feel excessive pride in what it means to be an American. She is disheartened that despite the hard work of undocumented communities and strong sense of American citizenship, families are still fractured. "This country is founded on immigrants, and now we're denying these people, these people who believe in the ‘American Dream'?" questioned Santana.

Through her research, Santana discovered a new passion with illegal immigration cases. "There's not enough research about this issue," she said. "People need to be aware of what's happening in our society."

Santana hopes to use her paper for admissions into law school. She will present her findings at the Nevada Undergraduate Research Symposium on April 30, 2018 at 12:45 p.m. at the Joe Crowley Student Union Theater.