Passion for football leads to career as a sports broadcaster

Passion for football leads to career as a sports broadcaster

“When I say I’ve been around football since I was born, it’s the honest truth. Football is all I know.”

Hours after Alex Stewart was born, his father held him in the hospital while watching a San Francisco 49ers game. From that moment on, Stewart would never be far from where a football game was.

He played football as a child and teenager until he realized that he didn’t have to play to be close to the sport. His grandfather Paul James never played football a day in his life but was still known for being the “voice of the BYU Cougars,” narrating all of their games as a sportscaster. 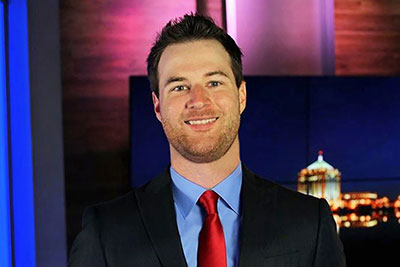 Now, he’s a sports anchor at WAOW News in Wausau, Wisconsin, covering high school football, the Green Bay Packers and other sports. His education geared him up for this position because the classes he took gave him real-world experience.

“You can have all the education in the world, you can read about how to do things in the field, but it’s not until you actually do it that the value comes in,” he said. “Both at the Reynolds School and the Cronkite School, I had professors that let me learn how the real world was actually going to be. They put you in a very simulated environment.”

Although his college courses allowed him to gain necessary skills independently, Stewart found himself searching his big break right after graduation. While waiting to find a position in his field for some time, he took some key advice to heart.

“My grandfather gave me a great piece of advice: never look back, always look forward and take every opportunity you’re given.”

Stewart held on to his dream of being a sports broadcaster and kept looking for opportunities. His first job after college was as an anchor for News Channel Nebraska. Then he landed his current position. For students wishing to follow in his footsteps, he gives similar advice to that which his grandfather gave him.

“Be patient,” he said. “It’s a tough industry to break into, especially if you want to do sports. Just be patient and stay diligent and never give up. If that’s your dream and if you know it’s what you want to do, don’t get discouraged.”

If students don’t get their dream jobs right after college, Stewart said it’s more than okay to take a job outside of the journalism field, so long as they never give up on their passion.

“Take work out of your field and as long as you never lose sight of your dreams or goal, by all means, take that opportunity and keep your skills sharp,” he said.

According to Stewart, once students land their dream jobs, it’ll all be worth it, and they won’t ever feel like they’re drowning in a career that isn’t their passion.

“I put my heart and my soul into playing football,” he said. “I am using sports broadcasting to stay close to the game I love. And, it is true what they say, if you love what you do, you’ll never work a day in your life.”