Recent donations from Newmont advances mining education at the University of Nevada, Reno

Recent donations from Newmont advances mining education at the University of Nevada, Reno

The Newmont Ventilation Lab at the University was recently dedicated to the Newmont Mining Corporation for its generous contributions to further education efforts and advance new mining techniques. More than $200,000 has been donated to the Mackay School of Mines in the College of Science to ensure students are equipped with the knowledge and skills for joining the Nevada workforce in the mining industry.

"Our ventilation teaching lab is without doubt, one of the best in the country," Chair of Mining and Metallurgical Engineering Manoj Mohanty said. "Our emeritus professor, Dr. Pierre Mousset-Jones spent his entire tenure, roughly 40 years, here developing the ventilation laboratory from scratch. Upon his retirement in 2012, Associate Professor Charles Kocsis was hired as the ventilation professor of the department. He has done an excellent job in upgrading the lab with Newmont's generous support of more than $200,000 over the last several years."

The Mackay School completed updates to the Mine Ventilation Lab in 2016, with the help of the Newmont contributions. Updates to the lab allow students to learn and practice with a physical model of the ventilation-on-demand system. Kocsis teaches students the system.

"What Newmont did was great, but how can you teach the students?" Kocsis said. "How can you deliver that knowledge to the students that they can feel? So that's why we developed the physical model."

Ventilation-on-demand is a system that allows mines to operate more efficiently by delivering air flow to the areas where activity is present. Not only does ventilation-on-demand cut down on operating costs, reducing greenhouse gas emissions, it also offers more health and safety precautions for working conditions in the mines. 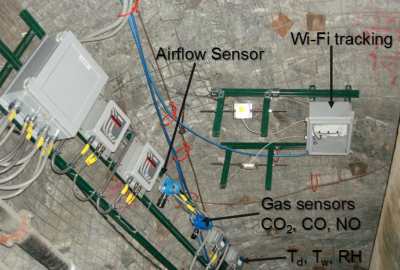 "It's a combination of health and safety, savings in respect to operating costs, and for the environment, we are saving greenhouse gas emissions," Kocsis said.

Kocsis did his doctoral thesis relating to ventilation-on-demand and calculated that for a large operation, 20,000 tons of carbon dioxide equivalent would be saved per year using ventilation on demand.

"It goes to show our students that there is a better way to design and operate than it was before and every step further is significant especially when you consider those greenhouse gas emission reductions," Kocsis said.

Evan Klouse is graduating in the spring with a Bachelor's of Science in Mining Engineering and was awarded the Westfall Scholar Award from the College of Science as a top-performing student with the highest GPA. Klouse will be working for Newmont as a mining engineer in the summer.

"This illustrates the constructive connection our department has with Newmont and their financial support helps us graduate quality mining engineers like Evan Klouse," Kocsis said.

Undergraduates can benefit from hands on experience that translates to real working conditions. The ventilation-on-demand model looks like a maze with 4-inch diameter tubing. Actual systems used in the mines will be several feet in diameter, but the principles for operating the model in the lab will be the same. Updates to the system include new 3D printed regulators and fans and a new computer program that operates the system within seconds.

"I'm scratching the surface with them to show how an end product would look in a physical model such that when they get to the operation they know," Kocsis said.

Responses from mining students have been positive. 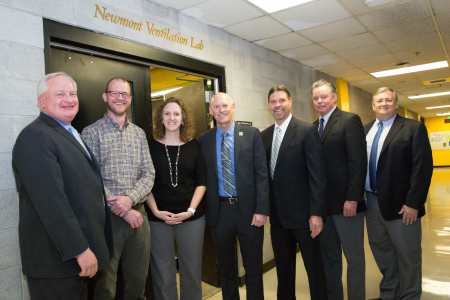 "The feedback was very interesting," Kocsis said. "They said we are mesmerized to see that this can be done with the ventilation system; and that's all thanks to Newmont for their financial support."

Other projects in the works are developing an instrument for monitoring diesel particulate matter and a health and safety training system based on virtual reality technology.

"Many of the things that our students learn in the laboratory have direct application in actual mines," Mohanty said. "Our goal now is to reach out to Newmont to upgrade our other laboratories."