The University of Nevada, Reno is one of 12 universities and colleges invited to assemble a team of undergraduate-student makers to compete in the Make48 College Challenge, a competition that airs on public television stations across the country including KNPB in western Nevada. The University's Biggest Little Makers team has been selected and is beginning to prepare for the August 2018 competition that takes place in Towson, Maryland.

In the Make48 College Challenge, which airs as Season 3 of Make48 Challenge, student teams have 48 hours to plan, prototype and pitch a new product idea to meet a market challenge. At the Make48 kickoff event Aug.10, they will learn the design category. The fast-paced competition then ensues, ending Aug. 12.

Impressively competent is how Crystal Harvey, manager of the Makerspace in the University of Nevada, Reno Innevation Center-Powered By Switch, describes the University's team.

"Everyone on the team is self-aware of their technical capabilities, passionate about creating and understands how to work in a team environment," she said.

Representing the University as members of the Biggest Little Makers are:

The competition is geared to undergraduate students and spring 2018 graduates are eligible to compete. Kirkpatrick, Salas-España and Smith all received their engineering degrees during the May 17 Commencement ceremony. 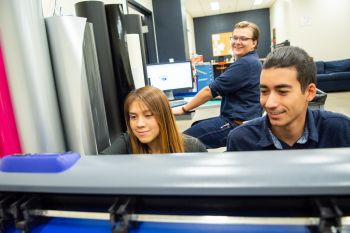 Salas-Espana, Smith and Bean at work in the Makerspace at the University’s Innevation Center—Powered By Switch, the team’s home-base as they prepare for the competition.

"As an engineering student, I have learned to love the art of innovation," Salas-España said. "I am driven by the idea of using my fundamental engineering knowledge to create new and innovative solutions to unsolved problems."

"I was always tinkering with things as a kid, and my dad saw it and told me I'd like mechanical engineering," said Bean, who loves to build and weld. "I just want to design and create the next coolest thing. I enjoy the whole process."

The team members were selected from what Harvey described as a strong, highly competitive of pool of applicants. "Our primary focus in determining the Make48 team members was to identify a diversity of perspectives and skills," she said.

Each team member not only enjoys designing and building, but also demonstrates an entrepreneurial spirit and desire to take ideas to the marketplace.

"I own a rapid prototype consulting firm that focuses on electromechanical designs," Smith said. "I love helping small businesses develop ideas and products. Where previously I simply marveled at how teams of engineers came up with amazing solutions to difficult problems, I now see how I can do the same with the tools in front of me and the thoughts in my head."

"I have a background in embedded systems, IoT solutions and general mechatronic solutions that has led me to start two companies in the last year focusing on rapid prototyping and specific IoT solutions," Kirkpatrick added.

The Makerspace at the Innevation Center, 450 Sinclair Street in downtown Reno, will be the Biggest Little Maker's training base. The Makerspace in the DeLaMare Science & Engineering Library is also supporting the effort. The experience will allow the team members to further develop skills in fast-paced innovation and design, 3D modeling, 3D printing, machine-shop work and more. 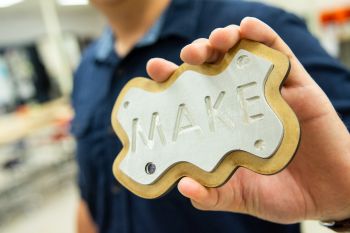 A plaque made in the Innevation Center’s Makerspace carries a simple message.

"There's been a maker culture in Reno for a very long time, but what we're seeing is much stronger collaboration between the University's makerspaces and others in our community," Tara Radniecki, engineering librarian in the DeLaMare, said. "Everybody in our community has access to more resources."

"It enables everyone to be a maker and to have access and learn to use technical tools. The maker culture is exploding and will continue to explode," Harvey said.

When it comes to education and students, a makerspace can play an important role: "It gives them an exploratory environment to apply what they learned in the classroom. It's the hotbed of active learning," Radniecki said.

Backed by industry leaders like Stanley Black and Decker, Ace Hardware and QVC, Make48 is an invention competition documentary series giving teams just 48 hours to come up with an idea, create a prototype and promotional video and then pitch their idea to a panel of expert judges. The remainder of the series takes the three winning teams through the process of trying to get their product to market. Season 2 begins airing in September 2018 on PBS/APT (American Public Television) stations across the country. For more information visit make48.com.