The University of Nevada, Reno's marching band, the "Pride of the Sierra," has been comprised of members with exceptional dedication and pride since its establishment in 1981. This July, the Pride of the Sierra welcomed their new director of athletic bands Corey Pompey.

Pompey was happy in his former position as an assistant director of bands for Penn State, but he felt like he needed a change. When he noticed a position at the University of Nevada, Reno for Director of Bands, he was compelled to apply.

"I was inspired by the world-class faculty and high desert scenery," Pompey, associate director of bands and assistant professor of music, said. "But, most importantly, I was really attracted to the initiative and vision that the president and provost have for the University; I thought, ‘I'd love to help contribute to that.'"

During band camp, he offered encouragement to his freshman students.

"If you find yourself struggling, I can guarantee someone else here has experienced the same problems and they can help you," Pompey said. 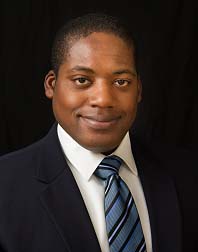 Pompey feels most rewarded when he sees his students having a good time and feeling proud of themselves.

"The sense of community is very important to the band," he said, which gathers every Monday, Wednesday and Friday from 2-4 p.m. for practice.

Pompey is pleased by the size of his freshmen class and is proud that the Pride of the Sierra includes students from more than 40 majors, but he wants to continue to increase the band's enrollment, which currently stands at 200 members.

"I am appreciative for the warm welcome from students and faculty, and also the support from Greater Nevada Credit Union," he said. "For band camp, Greater Nevada bought all of the students drawstring bags and water canisters. The gifts helped perk up and unify the band on the hot, rigorous days."

Since partnering with Greater Nevada Credit Union in 2012, the Pride of the Sierra has received more than $300,000 of philanthropic support for uniforms, instruments, travel and scholarships. Greater Nevada Credit Union recently renewed its support of the marching band and Howlers Pep Band with a new three-year sponsorship and a matching gift program for donations made directly to the bands and in GNCU branches.

"They're a very, very important partner in what we do," Pompey said.

To begin the football season, Pompey started with a show dedicated to the British music of the 1980s. Amidst other exciting performances, Pompey is looking forward to the Veterans Day show Nov. 10, where the marching band will perform patriotic music. The Pride of the Sierra will also learn approximately 30 other pieces to be performed during breaks and other events.

The University will also be hosting a competition, the Sierra Band Crusades, for various Nevada and California high school marching bands. Pompey reassures that nearby California schools are encouraged to participate.

"Attendance increases the chance of enrollment in the Pride of the Sierra after high school graduation," Pompey said.

At the Nov. 3 competition, the Pride of the Sierra will be performing a fantasy themed show.

"I am looking forward to a motivating season," Pompey said. "At the football games, you will find me on the sidelines smiling and walking around," he said.

The Pride of the Sierra's next performance will be during the Wolf Pack Football game, Saturday, Sept. 15, against Oregon State, which is also High School Band Day, with more than 400 area high school band members performing at halftime.