The creators of the AlertTahoe mountaintop fire camera network, the Nevada Seismological Lab, received the CENIC 2018 Innovations in Networking Award for Experimental Applications. The award is in recognition of their work to bring advanced information technology and telecommunications to help firefighting managers in their efforts to prevent and contain California and Nevada wildfires.

"An award from CENIC is very affirming of our work," Graham Kent, director of the University of Nevada, Reno's Nevada Seismological Lab, said. "It's so gratifying for our group to be recognized by this influential organization."

"The resources provided for our first responders and the public have made possible swift, effective fire-fighting and evacuation strategies, and potentially saved countless lives," Louis Fox, president and CEO of CENIC, said in a news release about the award recipients. "The impact that these projects have made in keeping Californians, our communities and our natural resources safe from wildfires is profound. The projects we are recognizing with this award have highlighted the usefulness and value of wireless extensions of the CENIC fiber initiatives." 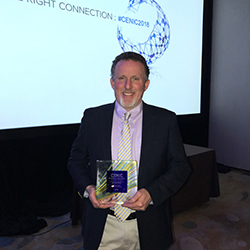 AlertTahoe, with its 35 fire cameras ringing Lake Tahoe and surrounding forests in California and Nevada, is the prototype network for several other of their systems of mountaintop cameras, such as the BLM Wildland Fire Camera System, with private high-speed internet networked across hundreds of square miles of Nevada and California that are protecting forests, communities and ecosystems.

"The success of our system lies in our ability to deploy wireless, microwave technology to enable high-speed Internet out in the wilderness," Kent said. "We call it the Internet of 'Wild' Things or wilderness Internet."

The fire camera system is built on the communications backbone of the Nevada Seismological Lab's earthquake monitoring network that serves Nevada and the eastern Sierra Nevada in California.

While the camera system is designed for the fire managers to spot and track fires with the ability to zoom, rotate 360 degrees and tilt on several cameras at once, it is also public-facing, with the camera views available for the public to monitor 24/7.

"We envision an army of volunteers on the cameras over time, especially times where fire danger is grave - and that will likely be the fastest path to discovery, with machine vision as a viable back up," Kent said.

Oh behalf of his team in the University's College of Science, Kent accepted the award March 7 at CENIC's annual conference in Monterey, California. His was one of three projects recognized this year, along with his collaborators from University of California, San Diego - with whom he worked to implement the system in southern California.

The project leaders recognized for 2018 are Kent; Ilkay Altintas from San Diego Supercomputer Center at UC San Diego and John Graham from Qualcomm Institute, UC San Diego for their WIFIRE system; and Frank Vernon from Scripps Institution of Oceanography, UC San Diego for their HPWREN system. WIFIRE is a National Science Foundation funded project that has developed real-time and data-driven simulation, prediction and visualization of wildfire behavior.

The CENIC conference highlighted exemplary innovations that leverage ultra-high bandwidth networking, particularly where such innovations have the potential to transform ways in which instruction and research are conducted, or where they further the deployment of broadband in underserved areas.