Restoration of rangelands in the Great Basin is taking a new direction as scientists seek to find the ideal seed stock to use for the many different ecosystems across the 70 million acre expanse – native seeds that are locally adapted to the conditions.

Land managers have spent millions of dollars on seeds over the past decades to use in their restoration efforts, but all too frequently, see only minimal results to repair damage from wildfire, introduction of invasive species or overgrazing. A new $500,000 USDA National Institute of Food and Agriculture funded project at the University of Nevada, Reno will use genetic studies and new seed stock and seeding strategies to find the most compatible seed and seed combinations for the various zones in the massive Great Basin.

“We’ve been working on how to restore Great Basin ecosystems for years,” Beth Leger, associate professor of plant ecology in the University’s College of Agriculture, Biotechnology and Natural Resources, said. “I’m most excited about this effort as we are trying new approaches, and hopefully land managers will benefit from new methods.”

The four-year study, titled “Rethinking Seed Sources In Rangeland Restoration: Ecological Genetic, Functional Trait, And Community Approaches In The Great Basin” is underway, with millions of native seeds from seven species of plants already collected since the project started this summer.

“We’re applying a plant ecology and genetics management approach in a management context, and will use what we find to improve restoration,” Leger, one of the two lead scientists on the project, said. “Seeds from outside the Great Basin have been used in the past with little success, and our approach is exploring the use of native seeds growing in local conditions, soil, climate and with other vegetation.” 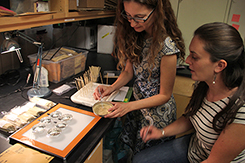 The team, with the help of graduate students over the summer and into the fall, has already collected seeds from around the Great Basin, including from grasses, shrubs and flowering plants.

“Our graduate student Allison has been like a machine, collecting everything we need from 16 sites in the northern portion of the basin,” Leger said. “She’s organized it all with binders and tabs, and seeds are in bags and boxes stored floor to ceiling. These will be used to grow plants from wild collections in the field and in greenhouse experiments. We will identify seed and seeding traits that improve establishment in arid, invaded systems for seven native grass, flowering plant and shrub species.”

The population genetic portion of the project will describe diversity and geographic structure in these important but understudied species, asking how genetic variation affects seed-source performance.

New tools for restoration
“This is the next step for us, for restoration, bringing the new population genomic tools to Nevada that have not been used here before,” Assistant Professor Thomas Parchman, who specializes in evolutionary and ecological genetics in the University's College of Science, said.

Parchman will be generating and analyzing population and landscape genomic data for the seven plant species across the Great Basin. Specifically, his lab will quantify landscape genetic structure to consider how the geographic scale of local adaptation may influence restoration outcomes, and to quantify genetic diversity within populations, asking whether populations with greater diversity or gene flow make better sources than more isolated and genetically diverged populations.

“There’s been 10 years of head scratching,” Parchman said. “This is the next step, bringing a population genetic perspective into the equation and looking at interactions between different species as a more successful path to restoration.”

Using students in the field to gather seeds will help to get data rapidly. Parchman’s lab will extract the DNA and sequence the various species.

The project will couple greenhouse and field experiments with the ecological genomic data to evaluate geographic characterization and genetic variation in the context of local adaptation and restoration performance.

“We’ll use a few planting and growing techniques, both in the field and in greenhouses – starting first with three plots – one near Reno, one in Oregon and one near Orovada in far northern Nevada); and eventually five gardens,” Leger said. “We’ll be planting 16,000 seeds in the ground in October 2018.”

In addition, they will plant gardens from different source populations for each species, to determine if restoration is more successful when the best seed sources for every species are assembled into a high-performing mix, or if it is more effective to restore communities with collections all from single, potentially co-evolved, communities.

Sustaining agricultural practices
“Our project aligns with the NIFA Agro-ecosystems Management Program, as we’re looking at new ways for natural resources in this region to sustain the dominant agricultural practice and enhance additional ecosystem services,” Leger said. “We’re looking for a more constant, reliable productivity so ranchers can graze more sustainably. With perennials that fluctuate less, ranching is better.”

In the state of Nevada, which encompasses much of the Great Basin, more than 63 percent of the state was allocated to active grazing allotments in 2015. Proceeds from cattle and calf production accounted for 32 percent of Nevada agricultural revenue, with much production occurring on public rangelands. In addition to providing forage for livestock, these agro-ecosystems also support a wide variety of native plants and wildlife, including rare species and species of concern, such as pygmy rabbits, sage-grouse and other wildlife highly dependent on native perennial vegetation.

“We’re working to reduce the annual invasive plant dominance – trying to help along the native perennials to help the balance between ranching and wildlife,” Leger said. “Our overall goal is to improve the process by which we restore the converted annual rangelands to native plant communities.”