Fly fishing in Mongolia with the College of Science

Fly fishing in Mongolia with the College of Science

Located in Northwest Mongolia at the confluence of the Eg and the Uur Rivers, hundreds of miles from the closest urbanized city exists one of the last strongholds of the giant Eurasian trout, the Hucho taimen (known locally as taimen). This endangered fish species can grow up to 72 inches, weigh up to 200 pounds and live as long as 55 years. While once widespread through eastern Russia, Mongolia and China, populations have declined significantly in recent years. College of Science faculty members Zeb Hogan (host of the National Geographic show Monster Fish with Zeb Hogan) and Sudeep Chandra have been studying this fish population in Mongolia for over 10 years. They were joined in their research this year by Dean Jeffrey Thompson, Professor Scott Tyler, research students Lanie Galland and James Simmons and a few alumni and friends of the College of Science. The goal, as Dean Thompson puts it, is to "catch as many taimen as you can in 10 days so the scientists can do their research." 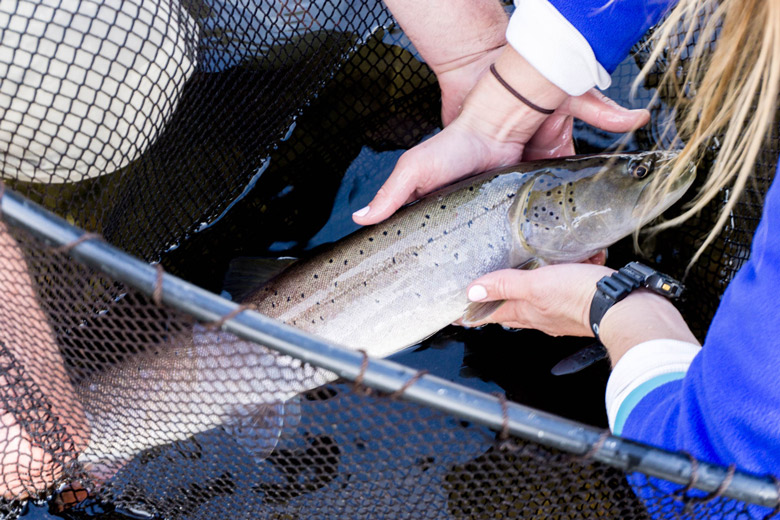 The group spent those 10 days fly fishing the Eg-Uur watershed with barbless hooks – the only legal way to catch taimen thanks to conservation efforts put in place to help save the endangered trout. When a taimen or lenok (a smaller trout species, similar in size to a rainbow trout) was caught, the researchers would weigh it, photograph it, measure it, and clip a tiny piece from the fin to gather data on the fish's diet and genetic make-up before releasing it back into the river. With over 10 years of data collection, they have been able to estimate the number of fish in the area, describe their migratory behavior, assess the likely impacts of subsistence and recreational fishing, and provide recommendations about sustainable management.

"I probably know the stretch of river where we work in Mongolia better than I know other rivers where I work, and so it's a special place to us," Hogan said. "We know the good fishing holes and we know how far fish are likely to move in spring and fall, where they spawn, and where they overwinter. Going back this year was special because of the familiarity – seeing some of the same fish year after year, working to better understand the place and hopefully help protect it." 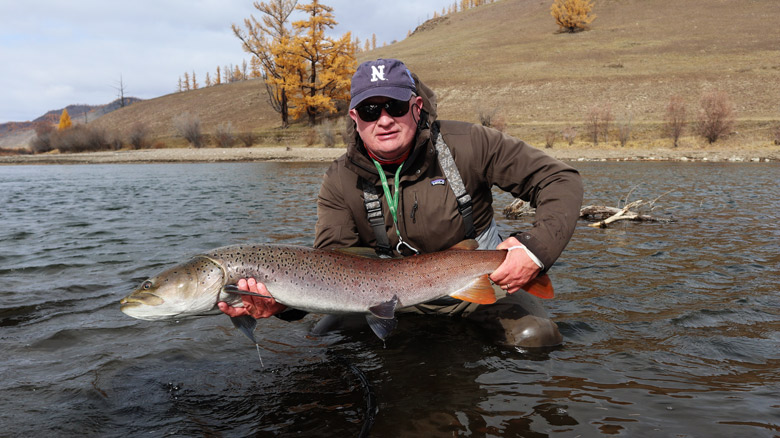 “Fishing for taimen is hard,” Thompson said. “It’s hard physically, and it’s hard mentally. If you have a fish hit your fly and you think you have it on the line, if you don’t land it that means the graduate students have one less sample for their research.”

This year's trip and scientific collecting was organized by graduate students Galland and Simmons. Construction of a dam on the Eg River was set to begin in 2016. Due to environmental concerns, its construction was postponed. Galland and Simmons focused this year's research on the river food web in an effort to learn how dams can change the structure of a river and the flow of nutrients taimen and other fish rely on.

"The postponement of the Egiin Gol dam construction provides a rare opportunity to measure how the dam might affect the food web ecology of the taimen and lenok populations in the Eg River system," Simmons said. "Conservationists now have a limited time window to proactively build a portfolio of research that can inform and influence the decision makers and stakeholders in developing nations that are considering hydroelectric projects." 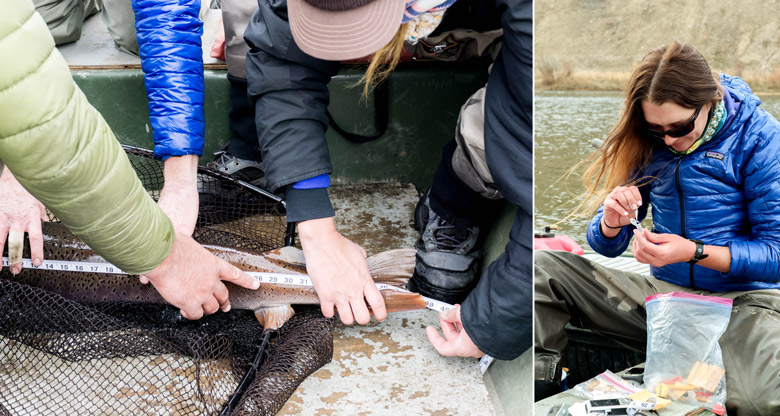 Galland recalls her first encounter with a taimen on her 2016 trip to Mongolia. “It was the most majestic, beautiful creature I had ever seen. Love at first sight,” she said. “There I was, holding this voracious, apex predator appropriately known as the “River Wolf,” and yet the silent strength emanating from this creature was both calming and intoxicating.” 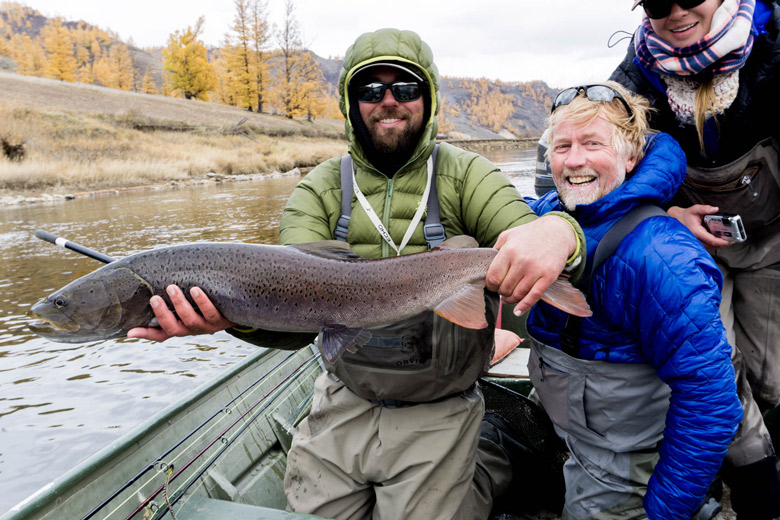 “What impacts me the most about the Mongolia trips is the general awe and appreciation of being on the other side of the world, among a historic culture, in a beautiful and pristine landscape, with a great group of people, and pursuing two passions: fish/aquatic science and fly fishing,” Simmons said.

The culture of taimen country

With the research started this year, there is an opportunity for science to take a real-time, proactive seat at the energy table in Mongolia while protecting a scientifically and culturally important species of fish. The protection of taimen is in line with the culture of Mongolian Buddhism which discourages the fishing and eating of fish, with the taimen being particularly revered in Mongolian Buddhist scripture. In 2004, the Taimen Conservation Fund along with support from the College of Science and Hogan and Sudeep's research helped to rebuild the Dayanderk Monastery, which was destroyed in the 1930's by Stalinist soldiers.

"Initially there was just a small monastery and stupa," Hogan said, "but in the last few years, more people have come to live around the monastery, and there is now a full time monk who serves as caretaker of the area. It seems as though the monastery will continue to grow and serve as a spiritual center for the surrounding communities."

After many years working with the community, the research team has developed a deep respect and understanding of the Mongolian culture. Perhaps the most critical members of the research team are the Mongolian river guides. They act as stewards of the land throughout the fishing season, protecting the taimen from poachers. They are integral to the research being done to save the taimen, some having worked with Hogan and Chandra for over a decade.

"We are immersed in the rugged Mongolian countryside, accompanied by knowledgeable local Mongolian guides," Galland said. "We are from vastly different cultures and different sides of the world, working cooperatively and with a common goal: to learn more about the remote, pristine river ecosystems and the species that inhabit them so that we may see them exist and proliferate far into and beyond our futures." 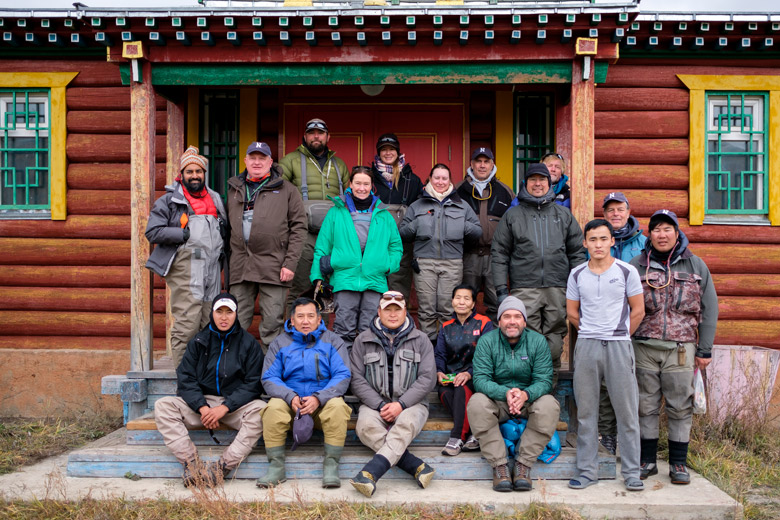 “A location for the community to gather was very important,” Thompson said. “Having faculty members at the University of Nevada be part of building the Monastery is very gratifying for me.” 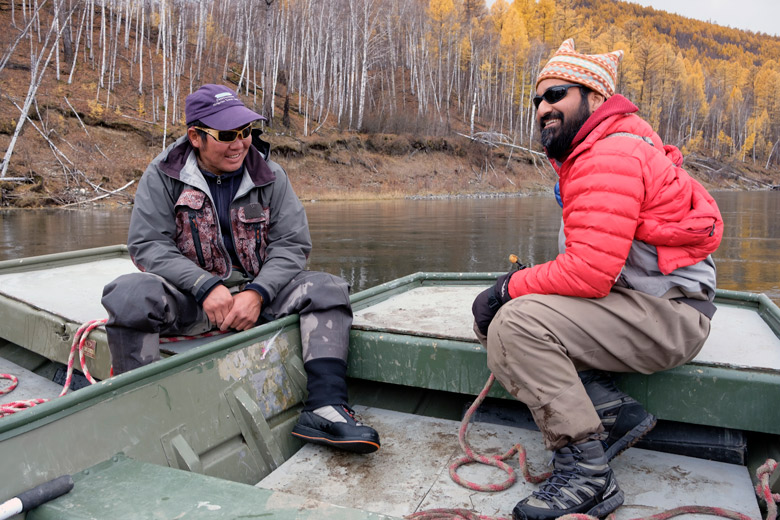 Chandra sits with Mongolian river guide and longtime member of the research team, Gonzarig Batsaihan (left). Batsaihan is the subject of a soon-to-be-released documentary titled “Gonzarig and the River Wolf.”

The scientific, cultural and political significance of this annual trip to Mongolia is far reaching. The research continues to influence regulations and policies that protect the taimen in Mongolia, and has the possibility of influencing sustainable fly fishing and ecosystem management globally. The worldwide impact of College of Science research being done at the beautiful and remote Eg-Uur watershed has inspired many.

"It's the kind of place that inspires people to value and protect a healthy environment," Hogan said. "We get to share this special place with a different group (often UNR researchers and alumni) every year. It's a trip that both Sudeep and I really enjoy."