Research delves into the sensory makeup of mosquitoes, fighting spread of disease

Research delves into the sensory makeup of mosquitoes, fighting spread of disease

University of Nevada, Reno entomologist Andrew Nuss and biologist Dennis Mathew are looking for a way to stop the spread of mosquito-borne disease. The goal of their research is to identify key mosquito odorant receptors that govern mosquito host-preference for humans and to genetically modify those genes in order to create mosquito strains that avoid biting humans. 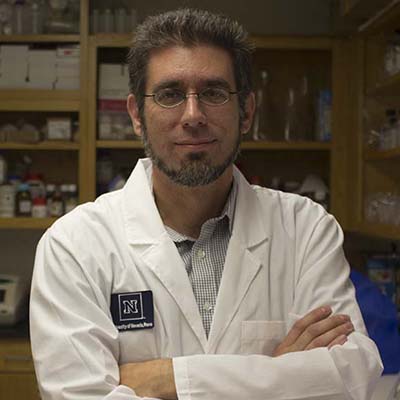 "Mosquitoes are a big problem in transmitting disease," Nuss said. "Malaria is foremost among these, resulting in more than 400,000 deaths worldwide every year and millions infected. Not all of these infections are fatal, but this illness contributes to other diseases, the ability to work and quality of life."

Nuss is an assistant professor in the University's Department of Agriculture, Nutrition and Veterinary Science, whose research proposal was recently awarded a $500,000 grant by the Defense Advanced Research Projects Agency, an agency within the U.S. Department of Defense.

By taking a closer look at the issue, Nuss noted key problems in the way mosquitoes are controlled now, and he came up with his new approach.

"Killing mosquitoes is one way of preventing the spread of disease, and others are trying to develop malaria vaccines, which has been difficult," Nuss said. "By and large, we have been using vector control as a way to prevent the spread of disease, and primarily that has been through the use of insecticides. While that works pretty well for a while, eventually the mosquitoes can become resistant, then you're left with a chemical you can't use, and sometimes they become resistant to entire chemical classes."

Nuss, who is based in the College of Agriculture, Biotechnology and Natural Resources, decided to approach the mosquito problem by studying their sense of smell. The mosquitoes that are most important when it comes to transmitting diseases are the ones that have become highly attuned to feeding on humans, facilitating rapid human-mosquito-human disease transfer.

"They have become co-adapted to us because we live in these nice, concentrated cities where they can find lots of people to feed on," Nuss said. "They preferentially feed on humans, and their odorant receptors may be attuned to human odors, specifically. So, we want to tweak that system by either knocking out the receptors that are responsible for human feeding, or replacing them with receptors from other mosquito species that feed on other animals in the environment." 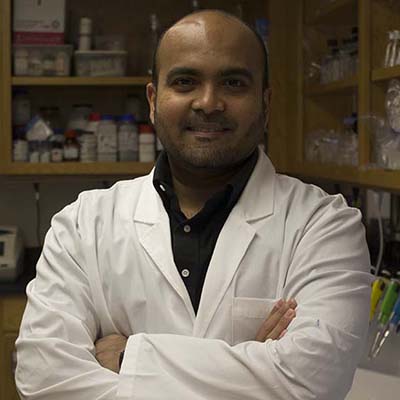 Dennis Mathew, University of Nevada, Reno assistant professor of biology in the College of Science

If these human-seeking mosquito species can be modified to avoid feeding on humans and instead on other animals, this could break the human-mosquito-human transmission cycle. Unlike insecticide-based vector control strategies, this would also ensure that mosquitoes could still feed on other animals in the environment to complete their life cycle without pressure to develop resistance.

Nuss continues his research with the help of collaborator Dennis Mathew, an assistant professor with the University's Department of Biology whose lab focuses on the neuroscience of smell, specifically in fruit flies. Together, Nuss and Mathew have combined their labs to work on understanding the olfactory makeup of mosquitoes.

"In my lab, we have a system where we can measure what the smell receptors of fruit flies - or other insects - can sense," Mathew said. "So, Andrew and I talked about taking advantage of this system and in this project we are going to identify those mosquito smell receptors that we suspect smell human odors and put them in the fruit flies. We will then use the fruit fly system in my lab to figure out which receptors are most sensitive to human smells."

The fruit fly larva, which is the Mathew lab's favorite model system, has a very simple smell system compared to mammals or even other insects. It has only 21 smell receptors and 21 pairs of neurons expressing them. In contrast, a human nose has approximately 400 smell receptors and approximately 10 million neurons. The numerical simplicity of the fruit fly system enables elegance and simplicity in the scientific approach.

While most scientists who work in this field are developing repellents, Nuss and Mathew are taking a bioinformatics approach to truly understand and change the common receptors found in mosquitoes.
Nuss and Mathew are working on the project together, along with Nuss's Research Associate Rana Pooraiiouby. With the recent grant from the Department of Defense, they are able to continue their research in what is considered a relatively new field. The $500,000 grant covers the first two years of their research, with a possible extension period of one year for an additional $470,000.

"Insect mitigated disease is a tremendous problem and we have been hammering away at it with a number of different approaches, with most of them involving chemical insecticides for years and years, but the problem remains," Nuss said. "So, we need new strategies, and our research is an approach where the mosquitoes still get to survive in an environment just as long as they are not biting humans. Preventing the spread of disease is the ultimate goal."