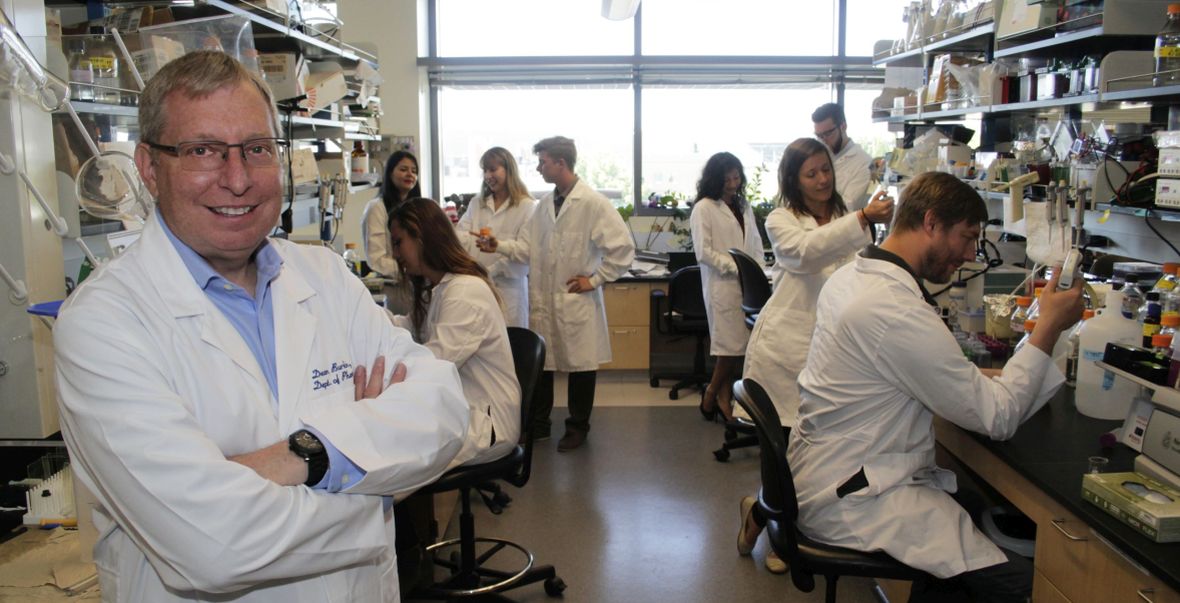 Researchers at the National Institutes of Health's National Center for Advancing Translational Sciences and the University of Nevada, Reno School of Medicine have demonstrated that a drug originally targeted unsuccessfully to treat cancer may have new life as a potential treatment for Duchenne muscular dystrophy.

The candidate drug, SU9516, represents a different kind of approach for treating DMD, a degenerative muscle disease that usually begins in childhood and has no known cure. It is caused by a faulty gene that leads to progressive muscle weakness, with death often occurring around age 25. Rather than trying to fix or replace the broken gene, SU9516 ramps up the muscle repair process, helping reinforce muscle structure.

NCATS Chemical Genomics Center Acting Branch Chief Juan Marugan, Ph.D., and UNR Med Professor of Pharmacology Dean Burkin, Ph.D., led a team that screened more than 350,000 compounds to find SU9516, which had been previously developed as a treatment for leukemia. The research demonstrated that this compound improved muscle function in both laboratory and animal DMD models. The results, published recently in Molecular Therapy, may provide a promising approach against the disorder and other muscle-wasting conditions.

Those with DMD lack dystrophin, a protein akin to a molecular shock-absorber that helps keep muscle cells intact. Without dystrophin, muscles are fragile and easily injured. Individuals lose muscle strength and the ability to repair damaged muscle tissue. Most die from heart or respiratory problems.

In earlier research, Burkin, who is senior author of the current study, and his co-workers showed that boosting the levels of a cell structural protein, α7β1 integrin, in affected muscle cells could alleviate DMD symptoms in a mouse model. In addition, increased amounts of the protein slowed the disease's progress.

Burkin and his UNR Med colleagues collaborated with NCATS researchers, including co-team leaders Marc Ferrer, Ph.D., and Noel Southall, Ph.D., to screen a large collection of compounds for molecules that could increase α7β1 integrin production in mouse muscle cells grown in the laboratory. The screen revealed that SU9516 raised integrin production and promoted the formation of muscle cells and fibers from DMD muscle stem cells, another important indication of its potential as a drug.

In a series of pre-clinical experiments, the researchers showed that SU9516 increased the production of α7β1 integrin in human and mouse DMD muscle cells. Subsequent tests found SU9516 improved muscle function and slowed indicators of disease progression. Apurva Sarathy, a Mick Hitchcock Scholar, was the lead author on these earlier, published findings, completed as part of her PhD thesis at UNR Med.

Burkin suggests that such a drug could be used alone, or in combination, with other therapies yet to be developed. There might be wide ranging applications to other muscle-damaging conditions, like cachexia, a wasting syndrome characterized by weight loss and muscle atrophy that is often seen in the late stages of cancers, and the effects of aging and injury, he noted.

"Integrin stabilizes muscle structure, and helps stimulate muscle repair and regeneration," Burkin said. "If we can artificially increase its production with drugs, we think it can help protect muscle cells from damage."

The NCATS-UNR Med team plans to work with medicinal chemists to make the molecule more specific for DMD, while also removing the toxic anticancer components, creating a safer version with a goal of future testing in patients.

This story was written by Steven Benowitz, science writer with the National Center for Advancing Translational Sciences, National Institutes of Health.