We don't know exactly how bees think, how they contemplate the world around them. If we ever do, though, it will be through the work of people like University of Nevada, Reno biology professor Anne Leonard and post-doctoral researcher Felicity Muth. Both have devoted themselves to the study of animal cognition, specifically focusing their work on bumblebees. They have published a paper in the April 2017 edition of Animal Behaviour, and Muth has taken her expertise to National Public Radio's Science Friday podcast. 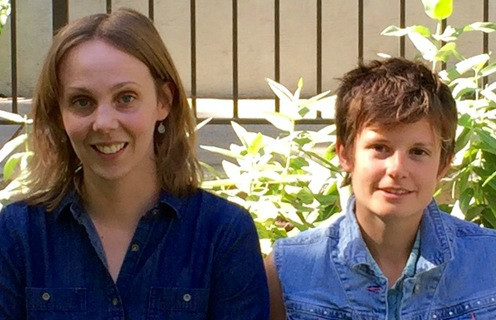 Leonard and Muth's paper, Multiple Rewards Have Asymmetric Effects on Learning in Bumblebees, focuses on how bees learn. Flowers are multifaceted, offering bees the ability to collect nectar and pollen. Most studies conducted on bees to this point have focused on nectar collection. Leonard and Muth's research added pollen to the mix. The goal was to see if adding something new for the bees to learn affected their ability to do what they already knew how to do.

Leonard was first drawn to the study of bees after facing frustration while attempting to study crickets.

"Crickets are not that cooperative. I went to a research conference, where I saw a talk on how bees learn various aspects of floral signals, like color, scent and pattern," Leonard said. "I realized that in this system, I could still study communication, but in this case the signaler would be the plant, producing a floral display that bees respond to. Much easier!"

As for Muth, her fascination with the subject began with a television program hosted by celebrated naturalist David Attenborough.

"I grew up watching that," Muth said. "Then in high school I got more interested and started reading classic animal behavior books. As an undergraduate student I started specializing in animal behavior and animal cognition courses, and then ended up doing a PHD. I still can't totally believe that I get paid for working on animal behavior."

Not only is Muth getting paid, she has now, much like the man who first inspired her, become a broadcaster in her own right. Muth appeared on the March 3 episode of Science Friday where she used her expertise on bees to discuss the recently published work of fellow guest and Queen Mary University of London biology professor Lars Chittka.

"It was really fun. I never had done live radio before, so that aspect was a bit nerve wracking, though I had a really good time," Muth said. "Hopefully in the future we will get a chance to talk about our own research."

More than having a good time, Muth feels that programs like Science Friday serve an important purpose for scientists.

"I think it's really important as scientists to get our findings out into the public sphere, and our papers do get a lot of attention," Muth said. "There's a lot of really good research that goes on by a lot of groups that work on bumblebee behavior. I think the more that gets out to the public, the better."

The collaboration between Leonard and Muth has certainly been a fruitful one. With their most recent paper and Muth's appearance on Science Friday, they are bringing important work and understanding about the way bees think to the masses. Leonard gives Muth much of the credit.

"It's been wonderful having Felicity here at the University," Leonard said. "She brings a rich background in animal cognition to my research group."