During July, the Biggest Little City has a booming art scene with the celebration of Artown. Fine arts, performing arts and creative arts are all at the center of the growing arts movement in Reno. But the city has been celebrating arts and culture long before July, as Reno joined other cities around the globe this year in commemoration of the 400th anniversary of William Shakespeare's death. University of Nevada, Reno Foundation Professor and Chair of the Department of English, Eric Rasmussen, and his wife, Victoria Hines, Ph.D., are at the heart of bringing to light the work and legacy of the poet, playwright and actor.

Currently, Rasmussen is promoting Shakespeare all over the world while curating the blockbuster "Shakespeare in Ten Acts" exhibition at the British Library in London and speaking at First Folio exhibitions in Oxford, Paris, London, Prague, Tucson, Boise, Kansas City, Las Vegas, and Santa Fe. .

"Shakespeare's presence in this area dates back over a hundred years, to early performances of heavily adapted plays in silver mining camps," Ian Dejong, graduate student of the Department of English, said. "Ever since then, he's kept cropping back up in odd, sometimes unexpected ways - he's never really left. Shakespeare's in Reno to stay, and I for one couldn't be happier."

Since April, events such as plays, exhibitions and workshops have been sprinkled throughout Reno in celebration of Shakespeare. Throughout the summer, the Bard's plays have been performed by the community in the Reno and Tahoe area. Local theaters such as the Merry War Theatre Group played "Maxbeth" on the steps of the Lear Theater in downtown Reno, and Good Luck Macbeth Theatre Company performed King Lear in April. The Lake Tahoe Shakespeare Festival is performing The Comedy of Errors, one of the few performances left of the summer at Sand Harbor through Aug. 21.

"Reno genuinely has really good theater, yet only one percent of the population goes to theater productions," Rasmussen said. "We wanted to bring the focus to the community and inside our local schools; it has been a really worthwhile endeavor to get everyone collaborating in the name of Shakespeare."

In addition, the Reno Jazz Orchestra will perform "Such Sweet Thunder" as a part of Artown later this week at Wingfield Park in Reno. The performance is a 12-part musical production based on the plays and sonnets of the Bard, with music from jazz legends Duke Ellington and Billy Strayhorn. The orchestra is collaborating with the Lake Tahoe Shakespeare Festival players, as they perform small parts of Shakespeare's plays in accompaniment to the music. The Artown event is scheduled in Reno July 30, and will also be played at Lake Tahoe's Sand Harbor Aug. 1, both showing at 7:30 p.m.

"Dr. Lamb is a published author, a brilliant critic and an engaging speaker," Dejong said. "His lecture is sure to be a fitting conclusion to the summer of celebration here in Reno."

Earlier this year, University undergraduates enjoyed a weekend trip to the Oregon Shakespeare Festival in Ashland, Oregon in celebration of the Bard. This trip gave a diverse body of undergraduate students the opportunity to experience live theater at one of the most premiere Shakespearean theaters on the West Coast. 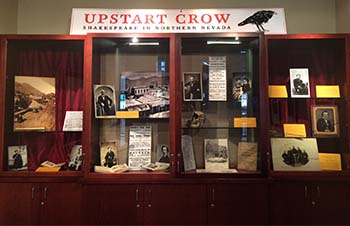 The University has been participating in the celebration of Shakespeare as well with an exhibition that recently ended this month in the Mathewson-IGT Knowledge Center. The University Special Collections put together the exhibit, titled Upstart Crow: Shakespeare in Northern Nevada, which shined a light on how Shakespeare contributed to the development of the Silver State. The display examined the impact of Shakespeare, both past and present, in northern Nevada. The materials that were on display ranged from the flourishing 1800s Virginia City Shakespearean theater scene to the modern Lake Tahoe Shakespeare Festival. A high-point of the exhibit was the original first through fourth folios of the Merchant of Venice.

Rasmussen's work focuses on editing Shakespeare and Early Modern drama. He has co-edited several works including The RSC Complete Works of Shakespeare, King Henry VI Part Three for the Arden Shakespeare series, and Cynthia's Revels for the Cambridge Works of Ben Jonson. He also published The Shakespeare First Folio: A Descriptive Catalogue.

Dejong has co-authored a number of essays with Rasmussen, covering a wide variety of topics relating to Shakespeare. The essay topics have ranged from covering the historical, material contexts in which Shakespeare wrote, lived and acted to writing about the city of London.

Late in 2014, Rasmussen authenticated the 17th century first folio of Shakespeare, which was found by a librarian in Saint-Omer, France. The first folio has a special significance, as it holds many of Shakespeare's plays since none of his original manuscripts survived. Since 1999, Rasmussen has served as the author of Shakespeare Survey's annual omnibus review for Cambridge University Press of all new editions and textual studies and is a member of the council of the Malone Society and the editorial board of Shakespeare Quarterly.