Campus Profiles provides the campus community a brief snapshot of some of their newest colleagues.

Campus Profiles provides the campus community a brief snapshot of some of their newest colleagues. 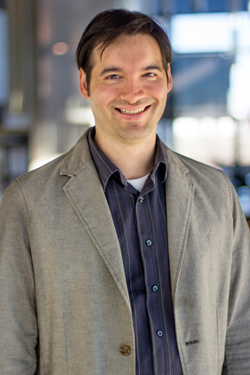 At a Glance
Originally from El Paso, Texas

Ph.D. in pharmacology from the University of Iowa

Ruben Dagda is an assistant professor in the Department of Pharmacology at the University of Nevada School of Medicine. His research duties within the department consist of teaching and mentoring graduate and undergraduate students and pursuing a line of research studying the effects of different drugs and other biological agents that can reverse the loss of neurons seen in age-related brain disorders such as Parkinson's disease.

Creating a cure with snake venom

As a graduate student in the Department of Pharmacology, I discovered two new proteins that were not previously characterized and that are important for regulating many signaling pathways of neurons. I found that those two proteins have opposite effects on neuronal survival and function of neurons.

Fighting Parkinson's one neuron at a time

At the University of Pittsburgh, I wanted to find out more how these two proteins can be experimentally tweaked so that neurons survive under different types of environmental stresses and come up with alternative therapeutic drugs that can "turn-on" the good signaling pathways.

The idea is that these drugs can increase the survival of those neurons in the context of Parkinson's disease and other brain-related diseases with the hope of delaying cell death and improving the quality of patient life.

I believe that if we can increase longevity in patients by one or two years, then we are significantly improving not just the health of affected patients but improving our economy in terms of saving billions of dollars in health care related costs.