Excelling with or without snow

On a snowboard or in the lab, Ford is head of her class 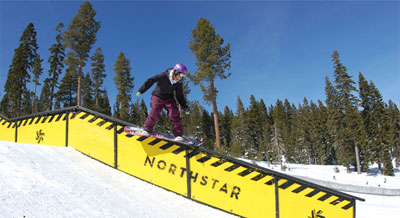 Excelling with or without snow

On a snowboard or in the lab, Ford is head of her class

Jessica “Jes” Ford, the University of Nevada, Reno’s undergraduate recipient for the Regents’ Scholar Award for 2008, has found the best of both worlds: she’s a champion snowboarder and notable collegiate scholar — and in both areas, she has limitless potential.

Ford’s college career has been interspersed with periods of great intensity, where she has either focused on her studies or on her snowboarding career. In fact, she had taken a few years off from college to further her snowboarding career, before returning to the University to finish her studies. In May, she graduated with a degree in physics from the College of Science.

“I’ve always been pretty motivated when it comes to learning things I’m interested in,” she says, “so research seems to be a natural path for me. It was hard going back to school after taking a few years off, but I just try to do my best when I commit to something.”

According to one of her instructors, Melodi Rodrigue from the Department of Physics, Ford combines an unassuming, gentle personality with a never-ending sense of wonder and inquisitiveness.

“Jes is the kind of student you always hope to have in class – she would always seem to ask the exact question I was hoping she would ask... she loved to take things to the next level,” Rodrigue says. “She’s very bright, but also very modest. She’s a very self-motivated person, and I was never worried about her progress. The end result was beyond expectations. Her senior thesis was graduate-level work.”

Ford, 25, originally from the small Alaskan town of Girdwood (population: 2,000 with one of Alaska’s truly great mountains, Mount Alyeska, located not far away), moved to Lake Tahoe after stints at the University of Alaska and Montana State University. She found the University Nevada, Reno’s campus conveniently located, and once she became immersed in her studies, found the Department of Physics faculty to be nurturing and inspiring to her.

“Drs. Radu Presura and Melodi Rodrigue have been my research mentors over the last few years,” she says. “They have both been really helpful and encouraging in letting me pursue the kinds of research I’m interested in, and in helping me get grants, scholarships and internships.”

Presura believes that Ford’s success in snowboarding has carried over into the classroom, and vice-versa.

“I think that she is driven by the thrill of discovery — in the laboratory — and by the thrill of action – in sports,” he says. “The achievements simply follow for a talented, focused and hard-working woman, as she is. Jes has mentioned to me that that physics helps her in her athletic career.

“In the fraction of a second she is leaping through the air, she can keep track and correct her trajectory, anticipate her landing, and prepare for her next leap.”

Ford, who is sponsored by Heavenly Resort, Rome Snowboards, Planet Earth outerwear and Neff headwear, has traveled the country in pursuit of her snowboarding career, which has included several professional victories. It shouldn’t be surprising, then, that she does plan on pursuing graduate schools... soon.

“I want to do cosmology research — that’s the study of the large-scale structure of the universe,” she says. “So right now I am beginning to apply for graduate schools when I can get a Ph.D. in astrophysics or astronomy.

But first Ford will travel to Argentina for six weeks this summer (for the South American winter) to continue snowboarding.

“I’m applying right now because I’m planning on taking the next year off from school, just to travel and relax.”

“Jes dreams to understand how the universe works,” says Presura, noting that part of her undergraduate research work including working on a National Jet Propulsion Laboratory-led project that focused on the mapping of dark matter in the universe. “She has both the desire and the capacity to pursue and understand complex problems such as what holds the universe together (dark matter) and what keeps it expanding (dark energy).

“In my opinion, Jes can excel in any career path she might choose. My hope is that she will choose a career in science because I think it takes a person talented, hard-working, critical, open-minded and enthusiastic as she is and well educated as she easily can become, to answer our questions about how nature works.”