The Launch of the Ozmen Center Women’s Initiative

Designed to build a stronger alliance of female entrepreneurs, the new initiative partners female University students with leaders in the community

June 23, 2016
By: Kylie Rowe
Advisor to the Ozmen Center for Entrepreneurship

Every year, The College of Business at the University of Nevada, Reno organizes the $50,000 Sontag Entrepreneurship Competition. This year, not one single woman was on a team that made it to the finals. The College of Business found this to be a major issue because it's not reflective of our community. There are plenty of female entrepreneurs and women involved and highly engaged in our local entrepreneurial ecosystem.

As a way to engage more young women in entrepreneurial activities, the Ozmen Center for Entrepreneurship decided to launch a Women's Initiative. With the help of an excellent team including Liset Puentes, Lanea Warren, Courtney McKimmey, many friends in the community and a $10,000 gift from U.S. Bank, we hosted a kick-off event with more than 100 women, many of whom are business leaders in the community. The hope was that this event would be the start of something big - bringing University student leaders and women in business together for the first time.

The event was catered completely by female-founded businesses including The Cheese Board, RAWBRY and Sugar Love. I was the emcee for the evening, announcing the Ozmen Center's intent to build awareness of female achievements in entrepreneurship, provide support for a newly formed University student club that addresses professional women's issues, and integrate strategies for greater inclusivity into entrepreneurial activities.

Before introducing Reno Mayor Hillary Schieve, I shared how inspired I was to see the face of a successful, local businesswoman all over campaign signs indicating her run for Reno City Council At Large. Now as Mayor and the owner of two small businesses, Clothes Mentor and Plato's Closet, she is an incredible role model for aspiring, civic-minded female entrepreneurs. We were honored to have the Mayor join us for the event and officially proclaim May 26, 2016 as a Day for Women in Business and Entrepreneurship.

For the next portion of the event, our entrepreneurial spirits emerged. Women were divided into groups to brainstorm then pitch a specific strategy, project or program the Ozmen Center could implement to benefit our University and community. Many ideas involved developing mentoring relationships among student leaders at the University and women in the community. There were also discussions about establishing funds to specifically invest in women.

At the close of the program, we encouraged women to continue the conversation by signing up to participate as a student or community member in the new club, Professional Network of Women, addressing professional women's issues. Female business owners and entrepreneurs were also invited to join our video project. Media and event participants shared incredibly positive feedback and are already seeking ways to harness this momentum to increase young women's participation in business and entrepreneurship.

Kylie Rowe is the Vice President of Relocation and Agent Services at Dickson Realty. She is an advisor to the Ozmen Center for Entrepreneurship and a two-time University alumna with plans to complete a Masters in Business Administration from the University of Nevada, Reno in 2017. 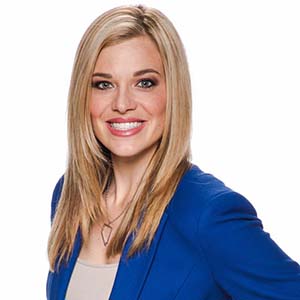 By: Kylie Rowe
Advisor to the Ozmen Center for Entrepreneurship