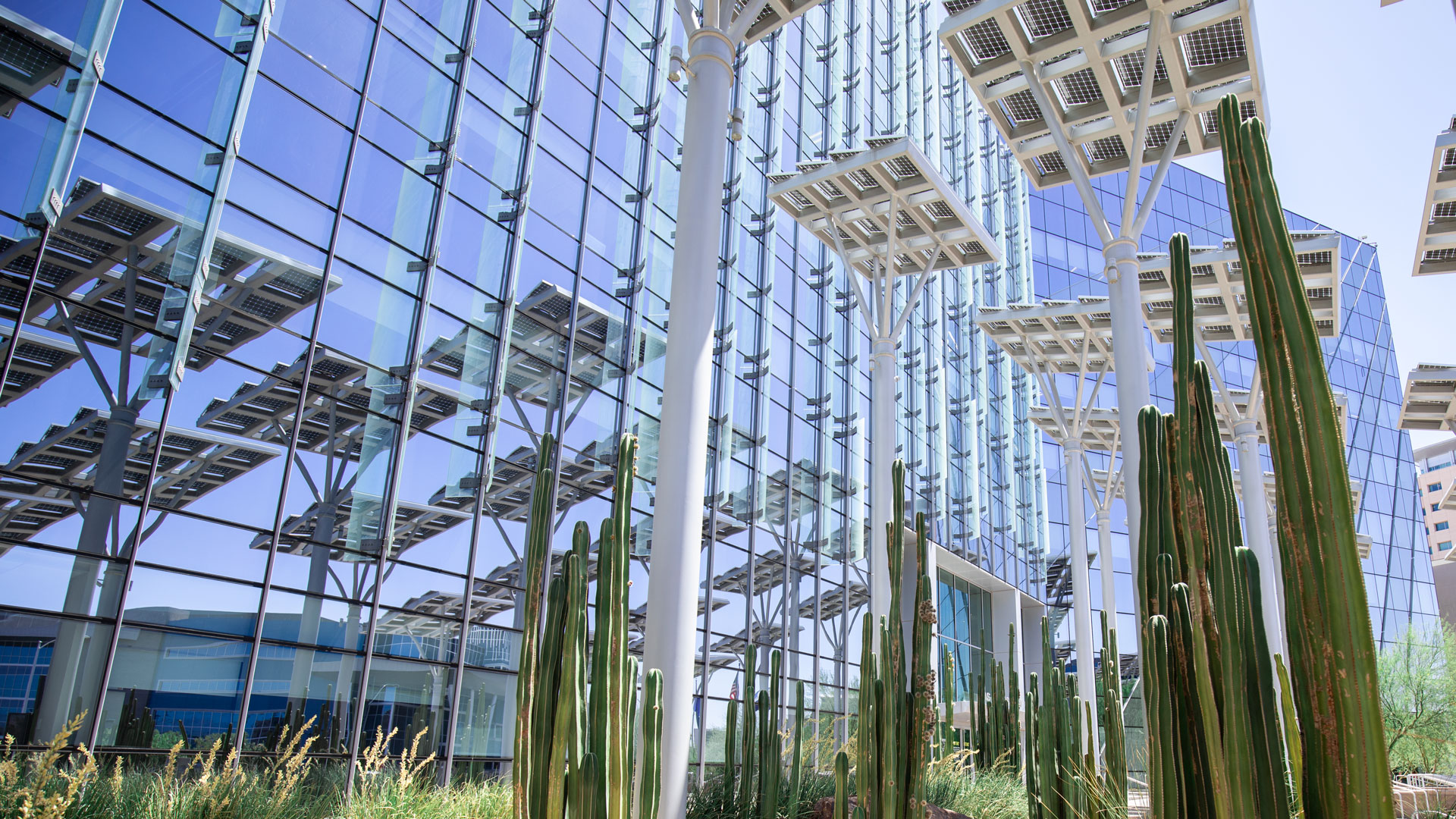 Towering solar panels stand guard at the front of Las Vegas City Hall against an ominous foe. The effects of a warming climate and severe drought are more apparent in a city built in the middle of the Mohave Desert, and the solar panels represent a quick and focused shift Las Vegas made 15 years ago toward future-proofing the city. The efforts have paid off. In 2016, Las Vegas was certified as a LEED (Leadership in Energy and Environmental Design) Gold city by the U.S. Green Building Council for implementing widespread sustainable building and operational practices. The city decreased annual water consumption by 40 billion gallons over the past 15 years, even as the population grew rapidly, and in 2020 the city launched its new 30-year Master Plan with a clear focus on sustainably managing Las Vegas’ future. Las Vegas city planner and Department of Geography alumnus Marco Velotta (B.S. Geography ’06, M.S. Land Use Planning ’08) has been at the forefront of the city’s sustainability movement since 2008. He grew up in Las Vegas and has witnessed the city’s exponential growth, its durability through the Great Recession and its subsequent, unpredicted transformation into a model city of sustainability. He is well aware that the path forward is not a straight line, which is a good thing because it’s Velotta’s job to build the map.

“Where do you find a crystal ball to say with confidence that this is what the future is going to look like?” Velotta  asked. “We have been taking action related to sustainability for more than 15 years. We were able to make huge investments in renewable energy projects and energy efficiency. Now, we stand to add another 300,000 people in the city of Las Vegas alone and another million in the greater metro area by 2050. We can continue building single family housing, which is water consumptive, or we can develop transit-oriented developments and mixed-use developments that are not as water consumptive and still capture that population growth. There are a few pathways forward; it’s just deciding which is the best one.”

Taking on the challenge

“The crazy thing is that if we do get to a point where water is not passing through Hoover Dam, Phoenix, Tucson, Los Angeles will all lose Lake Mead as a resource”

Water is number one on the city’s list of conservation concerns. Lake Mead – which holds water for Southern Nevada, as well as Arizona, California, Mexico and several Native American tribes – is at its lowest levels ever and continues to drop. In August for the first time, the federal government stepped in to mandate cuts in the amount of water Arizona, Mexico and Nevada can pull from the man-made reservoir as it dangerously approaches a dead pool with water no longer passing through the Hoover Dam, essentially cutting the Colorado River off in the middle of the desert. The Southern Nevada Water Authority, planning for the worst, broke ground on a new $1.5 billion Southern Nevada-serving low-level water pump in 2015. It was turned on in April of 2022 just as the intake valve on one of the two original water pumps breached the surface and became inoperable. As of today, September 28, the lake’s water levels were at 1,045 feet above sea level. The second original pump, still submerged and functional, sits just 172 feet below.

“The crazy thing is that if we do get to a point where water is not passing through Hoover Dam, Phoenix, Tucson, Los Angeles will all lose Lake Mead as a resource,” Velotta said. “Eighty percent of the water from Lake Mead is used for agriculture in the Imperial Valley and in Arizona. We may have seasons where we don’t get some of the produce we’re used to having. We have to ask, should we be growing things in the Sonoran Desert? Should we question this?”

Image caption: A photo of Lake Mead taken on June 14, 2022 shows the dropping water levels over time from the year 2000 to 2021 and June of 2022, including a dramatic drop over the last year as drought in the West continues to drain the valuable resource. (Jennifer Kent)

Las Vegas has been asking and answering similar hard questions about its own water consumption. The city recycles 99% of its wastewater, which is considered non-consumptive water usage. However, the consumptive sources of water usage such as landscape irrigation, water-based cooling systems and evaporation from pools comprise 60% of all water demand, a large majority of which comes from single-family residential properties.

“When we were doing outreach with residents, the thing that was consistent was that water is a concern,” Velotta said. “We’re considering rezoning areas for higher density housing that’s more water efficient. There’s also a nexus with affordable housing. We don’t have a lot of the multi-family and even single-family housing types you have even in Reno – we don’t have a lot of duplexes, triplexes. We’re really limited when two thirds of all the housing stock is single family, which is water consumptive, or apartments.”

There is a sweet spot for water-efficient housing – what the Master Plan calls the “missing middle” – three to four story multi-family homes in urban, walkable neighborhoods with nearby public transit. But it is single-family housing that still uses much of the city’s water and several conservation efforts have been directed at this sector. Strategies have included increased restrictions on landscaping and water features, as well as incentives to transition to xeriscape yards. In 2021, the city mandated the removal of non-functional grass in public spaces. These purely decorative lawns common to office parks, street medians, and housing developments that provide no recreational or environmental benefit are a drain on the city’s water supply. The piles of rolled up turf made national news just days before the city caught the spotlight again when a mob-suspected murder scene – human remains found in a barrel – was exposed on what was once the bottom of Lake Mead.

“We’ve got a lot of attention on us right now because of the drought. We’re in a nation-wide spotlight,” Velotta said. “It’s the things that the city does now to curb water consumption while still growing the population that will determine the future of Las Vegas.”

Water isn’t the only challenge. As a city built in the middle of the desert, a concerted effort must be made to counter the urban heat island effect. Asphalt, concrete and other components of urban infrastructure absorb and retain the heat from the sun much more than natural landscapes and can significantly raise surrounding air temperatures. Las Vegas has the most intense urban heat islands of any city in the country with temperatures 20 to 25 degrees hotter than the surrounding desert. One of the best strategies for countering this effect is planting trees. The Master Plan outlines the goal of planting 60,000 native, drought-resistant trees throughout the city and ensuring that 85% of the population live within 1/3 mile of green spaces that provide cooler temperatures, like a park or tree canopy, by 2050. Other tactics include painting roofs white (another conservation characteristic of City Hall) and reducing use of asphalt and concrete.

The strategies are bold for a reason. They work. Over the past decade, the city has reduced its annual municipal water demand by 2.25 billion gallons and has cut per-person water consumption in half since 2000. The city already met its previous goal of planting 40,000 trees by 2020. But bold strategies can make gaining public support a challenge. While water and rising temperatures are a top concern of Vegas residents, so is affordable housing, crime, access to public parks and open spaces. By inviting community input early in the planning process, Velotta and his colleagues at City Hall have been able to respond to community needs while weaving sustainability into everything they’re doing. Velotta is leading the East Las Vegas project, Nuestro Futuro Este de Las Vegas (Our Future East Las Vegas), which will turn a city-owned water-consumptive golf course into a mixed-used neighborhood that meets the Master Plan’s sustainability goals while developing a vibrant new neighborhood.

“This is where all these things come together,” Velotta said. “We can repurpose this Pete Dye-designed course to have two-thousand mixed-income and affordable single-family and multi-family housing units, a park, water-efficient landscaping and drought tolerant trees, a community center, a training center through College of Southern Nevada, opportunities for community-serving retail – we’d be checking all these boxes. We can really make it a neighborhood.”

“I consider Nevada to be my home. It doesn’t matter what end of the state ... We need to be future-proofing our urban communities and building resilience into our systems. We have to be of like mind in dealing with a lot of these things."

Each opportunity outlined in the Master Plan, from resource conservation to equitable education, environmental justice to historic preservation, presents its own unique challenges. As City Planner, it is Velotta’s job to untangle the web of potential solutions, weave together competing priorities and incorporate public opinion in a plan that best serves the future of the city he grew up in. As a graduate of the University of Nevada, Reno, he hopes his college home will take note of the progress made in Las Vegas. In 2022, the nonprofit research group Climate Central named Las Vegas the second fastest-warming city in the country. Reno was the first. While Reno isn’t reliant on Lake Mead for its water, the dwindling snowpack doesn’t offer the Biggest Little City much assurance. As Reno continues to see increased population growth, there is an opportunity to borrow from the lessons learned by its neighbors to the south.

“I consider Nevada to be my home. It doesn’t matter what end of the state. This is home for me,” Velotta said. “The water issues are the same. The conservation issues are the same. With climate projections the way that they are, there might not be a Sierra snowpack one day. You can hope for an atmospheric river, but that’s not something you want to be banking on. We need to be future-proofing our urban communities and building resilience into our systems. We have to be of like mind in dealing with a lot of these things. And when it comes to legislation, we’re playing under the same statutes. Climate resilience is something that needs to be addressed and planned for.”

Velotta is driven to continue to fight for the future of Las Vegas and Nevada. His reasons are personal, as they are for so many looking toward a future impacted by climate change.

“This work is about livable spaces, livable places and creating a sustainable future for our kids, my kids,” Velotta said. “No one wants to live in a place where the air is polluted, or there’s no water, or it’s so hot and it doesn’t need to be. I don’t want to take my kids to Sand Harbor only to tell them, ‘This was once a special place.’ Mark Twain himself said about Tahoe, ‘This is the air that angels breathe.’ I want that to remain true for my kids, too.”