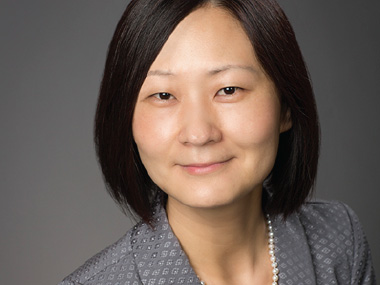 Effects of Aging on Multisensory Temporal Processing and Postural control

Fang Jiang joined the Department of Psychology faculty at the University of Nevada, Reno in 2015. Her research examines relationship between brain structure and function/behaviors and the mechanisms underlying such relationship, with a particular emphasis on functional relevance of cross-modal responses consequent on sensory deprivation. She uses research methods including neuroimaging and behavioral measures.

She received her doctoral degree from the University of Texas at Dallas in 2007. After graduation, she received a postdoctoral fellowship award from the Human Frontier Science Program (2008-2011). In 2013, she was awarded the NIH Pathway to Independence (K99/R00) Award for her ongoing work investigating how cross-modal plasticity might be influenced by the normal functional specialization of a cortical region.

The older population (i.e., individuals ages 65 and older) is predicted to reach 21% of the total population by the year 2030 based on the 2010 Census. Age related decline in multisensory processing and postural control are not only quality of life concerns for affected individuals, but also have large social and economic implications. Our lab is interested in understanding how GABA-mediated inhibition modulates the effects of aging on multisensory temporal processing and postural control. We use a variety of methods to understand the relationship among GABA levels in the brain (measured via Proton Magnetic Resonance Spectroscopy), brain oscillations (measured via EEG), and sensory/motor functions (measured via behavioral/postural tasks). Undergraduate trainees can expect to gain skills and experience through participating in one or more activities: facilitating participant recruitment, screening potential participants, reviewing literature, assisting with data collection and data analysis, presenting research findings at the University's undergraduate research symposium, and contributing to manuscript preparation and publication.