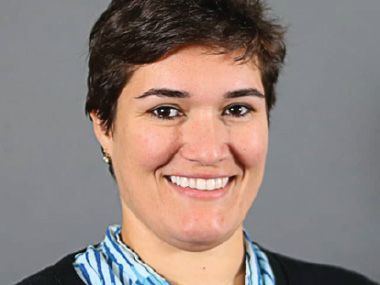 Lydia Huerta holds a joint faculty position in the department of communication and the gender, race, and identity program at the University of Nevada, Reno. Huerta specializes in 20th and 21st century cultural studies of the Americas, with an emphasis on the relationship between social media and narratives about the United States/Mexico border. Her primary research examines the cultural production created in response to the women-killings in Ciudad Juárez since 1993. Other research interests focus on social movements, cultural narratives and public policies created in the United States and Mexico, which call attention to issues related to undocumented populations, specifically, women and LGBTQ migrants.

In 2015 Jennicet Gutiérrez, a transgender migrant justice activist, interrupted President Obama while he was hosting an event at the White House celebrating LGBTQ Pride Month by yelling “President Obama, release all LGBTQ immigrants from detention and stop all deportations!” Gutierrez’s plea came after decade long reports of abuse against trans migrants in the custody of Immigration and Customs Enforcement. Shortly after the incident members of congress sent an open letter to the Department of Homeland Security to voice their concern for LGBTQ identifying detainees. Two years after this incident in 2017 and under the Trump administration’s aggressive policing of the United States/Mexico border, a caravan of transgender and gay Central American migrants arrived at the Nogales, Arizona border to request asylum. At the time there were numerous organizations supporting the caravan including the Transgender Law Center (TLC), Familia: Trans Queer Liberation Movement, Mariposas Sin Fronteras, National Immigrant Justice Center (NIJC), Puente Human Rights Movement, and Somos Un Pueblo Unido. Since then, the deaths of Roxana Hernandez and Johana Medina Leon under ICE custody and the activism of Jennicet Gutiérrez have created a growing number interest in research focusing on asylum cases, identity formation, deaths of trans women in detention, and trans politics as they pertain to transmigrants This chapter explores the way in which trans migrant women’s experiences shape their ability to communicate, seek resources and aid through digital technologies. By means of surveys and interviews I seek to understand how trans women migrants establish networks and access aid on their journeys to the United States, after petitioning for asylum, and after being released from detention. Drawing from transfeminism as an epistemological “theory of knowledge and power that guides a diverse array of trans feminist activist political practices” (Garriga-López 2019: 1621) I seek to highlight how transwomen migrant experiences shape their communicative practices and develop into transnational dialogues and networks of care through digital technologies that build communities of emotional support, resistance and survival despite the United States Immigration System. With this analysis, I intend to contribute to a growing corpus of trans feminist conversations around trans migrant experiences within queer, trans, cultural, communication and media studies.