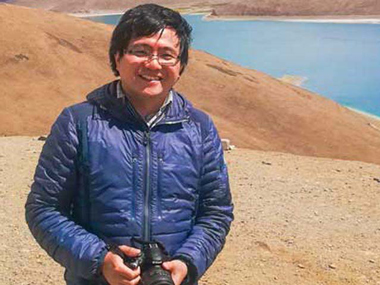 Wenrong Cao is an assistant professor of geology at the University of Nevada, Reno. He obtained his B.S. degree in Geology from the China University of Geosciences, Beijing, in 2008 and a Ph.D. degree in Structural Geology & Tectonics from the University of Southern California in 2015. Before he joined UNR, Wenrong conducted post-doctoral research at Rice University. Wenrong is a geologist interested in the evolution of the continents, especially the compositional, thermal, and tectonic histories of continental crust along the convergent plate boundaries where extensive volcanism exists. His study areas include the Sierra Nevada in California, the Gangdese Mountain in southern Tibet, and the Basin and Range in Nevada. Wenrong was a mentor of two NURA (Nevada Undergraduate Research Award) recipients.

In this project, I invite you to join a time travel to investigate the global patterns of volcanism and magmatism in deep geological time. How deep? I mean hundreds of millions of years and back to the Jurassic (dinosaur time!) and beyond. We will plot tens of thousands of volcanism data points (ages, compositions) from existing databases to a paleo-Earth map so we know when and where the ancient volcanism happened and how it can be connected to the geological evolution of our planet. Technically, we will use a software called GPlates to perform the paleo-geography reconstruction and use Python and GIS to visualize data and make movies. Python and GIS skills are not required but you should be willing to learn and explore.