My laboratory studies the replication of two human herpesviruses, Kaposi's sarcoma-associated herpesvirus (KSHV) and human cytomegalovirus (HCMV). Our studies focus on the mechanism of viral DNA replication and the function of viral encoded lncRNAs.

Image Above: Lifelong infection by herpesviruses.  The outstanding property of herpesviruses is their ability to establish lifelong infections in the host.  Initially there is a primary infection followed by the establishment of viral latency within days or weeks and periodic episodes of viral reactivation which can occurs months or years later. During latency there is limited viral gene expression and the viral genome is maintained as an episome inside host cells.  When the virus is in a latent state there are no new infectious virions being produced. During reactivation there is a trigger such as immune suppression, UV or stress which causes the virus to enter into the lytic phase of replication. The lytic phase is characterized by expression of the major viral transactivator which supports the complete cascade of viral gene expression and results in the production of infectious virions.

There are eight human herpesvirus: herpes simplex 1 and 2 (HSV-1, HSV-2), varicella-zoster virus (VZV), Epstein-Barr virus (EBV), human cytomegalovirus (HCMV), human herpesvirus 6 and 7 (HHV-6, HHV-7) and Kaposi's sarcoma-associated herpesvirus (KSHV). Herpesviruses are large double stranded DNA viruses that remain with the host after initial infection followed by periodic episodes of reactivation. Herpesviruses have distinct lytic and latent lifecycles. Maintenance of herpesvirus DNA during latency is associated with expression of a limited number of viral encoded transcripts and lack of production of infectious virus. Lytic replication involves a cascade of viral gene expression, leading to production of infectious virions. The exact molecular triggers for reactivation are poorly understood but the immune status of the host and cellular stresses are often contributing factors.

KSHV or human herpesvirus 8 (HHV-8) is an oncogenic gamma herpesvirus that is the cause of Kaposi's sarcoma and body cavity lymphomas. During lytic reactivation, KSHV produces a highly abundant nuclear localized transcript, polyadenylated nuclear RNA (PAN RNA). PAN RNA is the most abundant viral transcript during lytic infection, accounting for over 70% of all poly-A RNA in the cell. The poly-A tail of PAN RNA interacts with a cis-acting element (the ENE) to form a triple helix motif, which helps it accumulate to high levels by preventing degradation. PAN RNA was shown to regulate viral and cellular gene expression by interacting with host cell and viral proteins and by mediating changes in chromatin modifications. A recombinant BACmid defective for PAN RNA expression fails to reactivate and produce supernatant virus. This established PAN RNA as an essential long non-coding RNA (lncRNA) for virus replication and growth.

We have previously shown that cells (BJABs, Jurkat, RPE, THP-1) expressing PAN RNA have an enhanced growth phenotype, growing faster and to a higher cell density than compared to cells without PAN RNA. Our data shows that PAN RNA interacts with cellular chromatin modifying complexes to either activate or repress viral and cellular gene expression, a property consistent with the function of cellular long non-coding RNAs. Also, we show that PAN RNA is associated with a dysregulation of expression of cellular immune genes and production of inflammatory cytokines. Currently, my lab is investigating the mechanisms involved in the interaction of PAN RNA with the viral genome that mediates changes in epigenetic modifications during lytic reactivation. We are also examining the function of PAN RNA upon initial infection and in primary cells. Our techniques include the use Next Generation Sequencing (NGS) to determine expression patterns correlating to nucleosome occupancy, and ChIP-seq for histone modifications. We are evaluating components of the cellular inflammasome in relation to the expression of PAN RNA. These studies continue to increase our understanding of lncRNAs and our data support a role for PAN RNA as a major global regulator of viral and cellular gene expression. 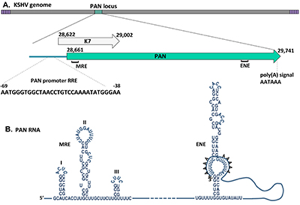 Image Above: Schematic diagram depicting key features of the PAN locus and transcript. (A) The nucleotide numbering for the K7 ORF and PAN transcript corresponds to GenBank accession number U75698.1 for HHV8/KSHV genome type M isolated from BC-1 cells. The numbering for the RRE within the PAN promoter and the ENE is from the transcription start site. (B) The secondary structure of the ENE and MRE sequence within PAN RNA to prevent degradation and increase stability.

HCMV is a ubiquitous herpesvirus that infects 60-90% of the population. HCMV is usually asymptomatic however virus infection can cause severe disease and mortality in immune compromised patients. HCMV reactivation and lytic replication can have a variety of disease manifestations include retinitis, pneumonia, colitis, and hepatitis. Congenital HCMV infection, with transmission of the virus from mother to fetus during pregnancy, can cause a range of defects including microcephaly, premature birth, hearing loss, vision loss, seizures, lack of motor coordination and intellectual disabilities. For children and adults, the normal course of infection involves a primary lytic infection that establishes the virus within the host and will normally elicit an immune response to combat the virus. As the host immune system works to clear the virus, some virus will go on to establish a latent infection within host cells. For HCMV, the viral chromosome can persist in latently infected CD34 (+) hematopoietic progenitor cells (HPCs). Latent HCMV has limited viral gene expression; viral factors that are required to maintain the HCMV genome and evade the host immune system are expressed. The regulation and maintenance of latency is poorly understood and the reactivation of latent virus can cause serious disease and death in immune compromised hosts. My lab is interested in the cis and trans acting factors that are required to maintain the viral genome during latency. This includes elucidating the regions of the viral genome that are required to tether the viral episome to the host chromosomes during latency. Data from our lab indicate the terminal repeat (TR) region of the HCMV genome is required to maintain the virus during latency. We are currently in the process of determining specific sites within the TR region that direct tethering and latent replication.

My laboratory is also interested in viral DNA synthesis during lytic replication. For HCMV the viral encoded factors required for oriLyt dependent DNA replication were originally elucidated using the cotransfection-replication assay. The cotransfection replication assay is a powerful method where the plasmid encoding the cis-acting origin of lytic replication (oriLyt) is cotransfected with plasmids that encode viral factors required for origin-depended DNA replication. Although cotransfection assays and viral mutants have been invaluable to our current understanding of HCMV lytic DNA replication, novel approaches are necessary to understand the mechanism involved in HCMV lytic DNA replication initiation, elongation and maturation of viral genomic DNA in a cellular environment. We are utilizing a technique called accelerated native isolation of proteins on nascent DNA (aniPOND) during HCMV lytic infection of human fibroblasts followed by mass spectrometry to identify proteins interacting with nascent viral DNA. By pulsing cells with a nucleoside analog (EdU), and attaching EdU to biotin prior to streptavidin purification, we are selectively isolating replicated DNA and associating proteins. aniPOND is an innovative technique for high-resolution analysis of proteins at replication forks or on mature chromatin depending on the length of the EdU pulse and chase time. Using the aniPOND technique we are currently in the process of characterizing several cellular and viral factors with respect to their involvement in viral DNA synthesis. 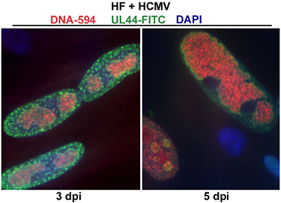 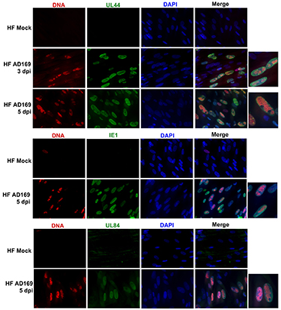 Image Above: Visualization of EdU labeled DNA with viral and cellular replication proteins. Super confluent HF cells were incubated with 25uM EdU for 60 min at 3 or 5 dpi. EdU incorporation was visualized by fixing cells with 4% paraformaldehyde followed by permeabilization (0.5% Triton) and clicking Alexa Fluor 594 to EdU. Cells were incubated with the indicated primary antibodies overnight, followed by Alexa Fluor 488 secondary antibody and mounted onto glass slides using ProLong® Gold Antifade Mountant with DAPI. Images were captured using a fluorescence microscope (Carl Zeiss, Inc.) at 40X magnification; zoomed images are shown next to the merge image.