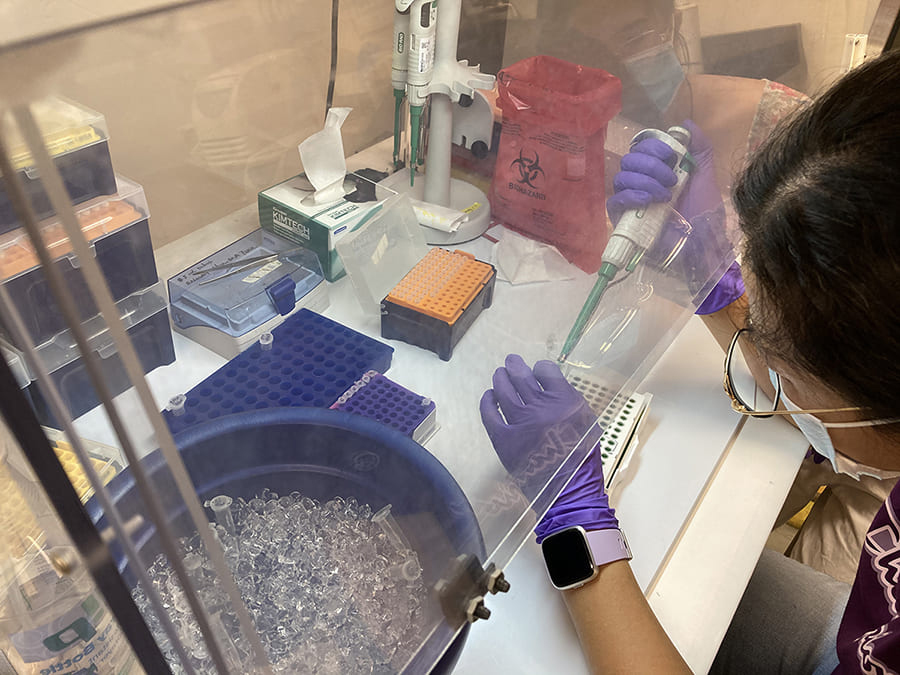 The highly contagious COVID-19 Delta variant has been successfully identified and tracked in Truckee Meadows wastewater since June 2021, establishing the monitoring process as a viable means of detecting new COVID-19 variants that may be present in Washoe County.

And while the Truckee Meadows COVID risk meter – based on several factors – remains very high, the level of Delta variant in the community has been trending down since September and the Risk Meter prediction is for the risk in the community to inch lower next week.

In continuing studies and monitoring of Truckee Meadows wastewater, researchers at the University of Nevada, Reno, working with the City of Sparks, the City of Reno and Washoe County, have been able to identify a number of COVID-19 variants that are present in the community, and initially detected the variants in wastewater months before they were identified from clinical monitoring. can detect them in wastewater simultaneously or even before being detected through sequencing of clinical samples.

Nevada Today news stories from Hydrologic Sciences and the departments and centers that contribute to the program.

The Global Water Center is made up of faculty from all over the University community. Learn about their work to better understand and protect our most precious resource.

The Discover Science Lecture Series continues with a visit from Apollo 17 astronaut and scientist Harrison Schmitt who stepped off the Moon's surface on December 19 during the last lunar visit.

Student researchers studied security in a variety of fields.

Students, faculty and alumni participated in many aspects of this year's AEMA conference

The resilient class of 2020

'We faced hardship and some disappointments along the way, but we all made it through in the end'

Biology professors Zeb Hogan and Sudeep Chandra receive 4 years of funding for their research in Cambodia.

The Sept. 23 conference will discuss how climate change is impacting Nevada

The College of Science favorite is back for a new season

The Mackay Muckers had enough female recruits for both men's and a women's teams for the first time in five years.

A woman among men: Margery's story

Wendy Calvin looks back at 15 years of working on Mars

A place in history: the Mackay School

A look back at some remarkable images from the Mackay School's past.

Service learning opportunities offered in the geography department at the University of Nevada, Reno has students building community ties for marginalized populations

Explore this incredible geological site and hear the Burning Man Organization's plans for the property in this special field trip edition of Mineral Monday.

Explore one of the Keck Museum's off-site storage locations with curator Garrett Barmore.

Through Community-Based Research, students explore problems and offer understanding, tools and ideas to make a difference

The University of Nevada, Reno partners with five other universities nationwide to offer new topics in hydrology research.

Each Monday, explore the many amazing minerals, fossils and historical objects on display at the W.M. Keck Earth Science and Mineral Engineering Museum with curator Garrett Barmore.

Game of drones: College of Science students test the use of unmanned aircraft systems for research

Get Ready for Shaking during Annual Earthquake Drill

The Great Nevada ShakeOut is Oct. 19

Controlling antimicrobial contamination of soil and water with bacteria

What Namibia can teach us

University of Nevada, Reno associate professor Jill Heaton's work in the southern African nation benefits students both there and here

Magnitude 3.9 one of 300 earthquakes near Gerlach, Nevada

Scott Tyler – taking the world’s temperature on land, in the sea and in the air

Recognized for advancements in environmental processes through novel measurement, theory and international collaboration

As appointees to the Nevada Drought Forum, Doug Boyle and Mark Walker will help set the course to water sustainability for Nevada

University and DRI continue important research work in many areas

Students get shaken up in earthquake simulator; trailer comes to University campus

University of Nevada, Reno professor Stacia Gordon to discuss her research on partial melting at awards banquet in Vienna

University professor to be honored at National Groundwater Expo

Peter Goin has been using his photographs and those of others to research the visual history of Lake Tahoe for 25 years.

New platform in works to monitor environment, multi-hazards for use by statewide emergency managers

College of Science forest researcher to study climate, environment over past centuries

University of Nevada, Reno Director of Geology recognized for his contributions in earthquake risk reduction

University of Nevada, Reno and Scripps Institution of Oceanography to collaborate